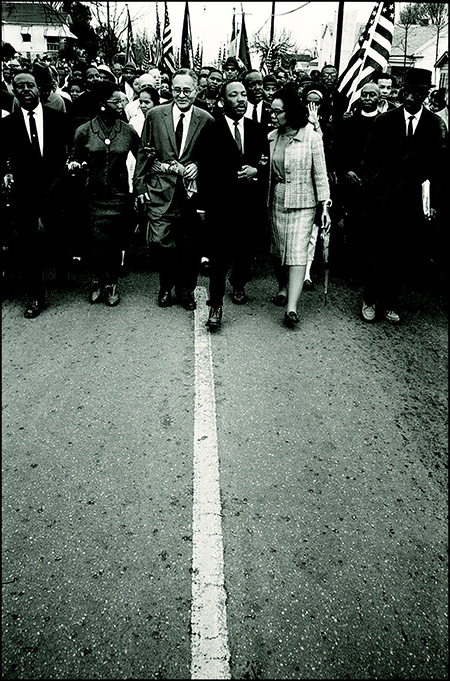 One sure way to get to the heart of Selma — the visually resonant, 54-mile civil rights march from that city to Montgomery in 1965 — is to study the rich output of photojournalist Dan Budnik, the same man who chronicled the New York School of Abstract Expressionists beginning in the 1950s. “Marching to the Freedom Dream” proves how Budnik — now 81, residing in Flagstaff, Arizona and still aiming his camera at social, political and cultural issues — balanced the need to capture newsworthy moments with the raw beauty of what he was witnessing.

Iconic photos such as “Entering Montgomery on Oak Street,” where Martin Luther King Jr. leads the flag-bearing, arms intertwined crowd as he steps onto a long white line, are presented side-by-side with narrative images such as “Mrs. Fannie Kent,” in which an older African-American woman takes a possessive stance on the porch of her rundown home. It’s a compelling display of almost 50 gelatin silver prints documenting not just the Selma march, but also the Youth March for Integrated Schools in 1958 and the March on Washington in 1963. One remarkable photo (reprinted in 1998) from the latter march must have been taken from a crouching position, with Budnik limiting the composition to the upper part of the Washington Monument against a cloudy sky and a few silhouetted African-American faces peering from behind a white wall in the foreground.

Although these are predominantly black-and-white images, Budnik does include two rare dye-transfer color prints, one of them being the close-up “Martin Luther King Jr., Beulah Baptist Church, Montgomery, Alabama, March 1965.” Another MLK portrait, a black-and-white taken right after the March on Washington, graced the cover of TIME magazine in August 2013.

In the year of Selma’s 50th anniversary, the new Oscar-nominated movie might be wonderful, but I would suggest — if it’s iconic images and profound emotions you want — there’s nothing like the real thing.