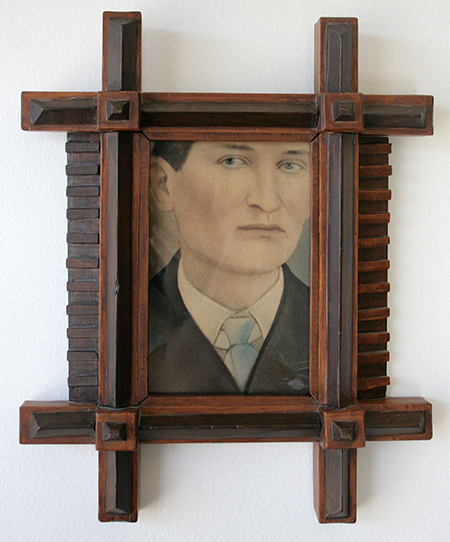 David Lackey may be best known for his appearances on Antiques Roadshow, the popular PBS series that travels around the country giving locals access to expert appraisers from auction houses and antique stores. Lackey, who owns David Lackey Antiques & Art in Houston, has been part of the show since its inaugural season 18 years ago.

In addition to art and antiques, Lackey also seeks out vintage frames, 19th-century photographs, old books, and other found objects, which he uses to create surrealist-inspired assemblages. In fact, Lackey’s “Voyeur,” a photograph of an eye in a circular frame, pays homage to a surreal object in Houston's Menil Collection — Joseph Sacco’s “Oeil de Jeune Femme,” a tiny painting of an eye in an oval brass frame.

Like the surrealists, Lackey uses unexpected juxtapositions to produce startling narratives. “Rule of Three” combines sections of three portraits in a frame with three openings. The way he crops and frames the photographs creates a four-eyed creature that is part man, part woman. In “Gifted,” he replaces the young man’s ears with butterfly wings to intriguing effect.

The frames are as integral to the work as the photographs. It often takes months for Lackey to achieve the perfect marriage of photograph and frame. For “Parallel” he combines a delicately hand-tinted photograph of a young man with a unique handmade frame. Several pieces incorporate not just photographs but small objects as well. “Playing with Prodigal Sons” has a grid of 12 openings that contain portraits and partial images of male torsos, as well as a small penknife and compass mounted on book endpapers.

Much of the work is somber due to the sitters’ expressions. Nineteenth-century photography was an expensive undertaking requiring extensive preparation. Consequently, the subjects wore their Sunday best and went to a photography studio, where the photographer arranged props, pose and lighting. For the most part, a formal portrait was not an occasion to smile.

Although Lackey has been making these assemblages for years, this is his inaugural gallery exhibition. He has just the right touch with his materials, and the results are both captivating and disconcerting. More than likely, the surrealists would have welcomed him into their fold.