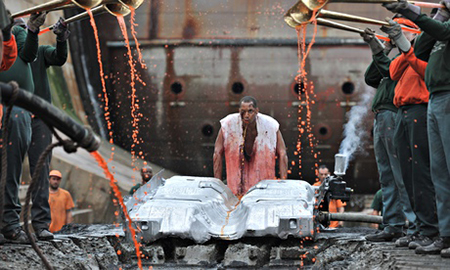 The bacchanalia that many of the art fairs on the international circuit have become (and I know a week after Miami that is now stale news) suggests to me just how eager the art world is to be something that it really is not: Hollywood. Oh, part of it sure wants all that money and celebrity. Starting my way through Sarah Thornton’s newest anthropological case study (“33 Artists in 3 Acts”) immediately makes the point, Jeff Koons being the vehicle. She clearly hates his work, not that I will ever fawn over it myself. If Koons is our latter day take on Warhol, he eschews the chaos of that messy old Factory in favor of graceful attire plus canned and rehearsed ingratiation. His approach to the depiction of fucking reminds me of a line from Douglas Adams at the so-called Restaurant at the End of the Universe: Patrons are to witness not so much the after life as the aprés vie. This guy comes across like a superficial jerk … except he’s so damned cuddly and works hard. The not so subtle ploy works awfully well in the politely irascible international art universe, the one with all the private jets, but would die quietly on Rotten Tomatoes.

Still, that is basically the way a key portion of the art world wants to have it nowadays: the trappings if not the sheer bulk of the film industry. The artists — the ambitious ones that is, meaning the ones who want to be seen in the right places, handled by the major dealers, placed in the highest end collections — are more like film producers than the solo acts we still tend to imagine differentiate them from their entertainment industry counterparts. So we have the likes of Matthew Barney and, most importantly, Steve McQueen; they take it all the way. And bravo for the fine work they have produced. Barney’s level of ambition and commitment to the “Cremaster” series and “River of Fundament” make the eight years dedicated to the development of each pay off. He makes classic Surrealist paterfamilias such as Luis Buñuel look up to date but puny at the same time. McQueen, of course, crossed over and then quickly rose to the top with his superb mainstream Oscar winner “12 Years a Slave."

But I have to admit something of a preference for the older tradition embodied by, say, Michael McMillan. An apprenticeship working on film sets and props provides the chops that the artist elevates with sheer individual invention, none of that creativity by committee. An artist with maybe a few assistants, as opposed to a full on production crew, can never compete on the same playing field. But the resulting work in the former case just feels so much … their very own. I admit it, that tends to get me more to the “wow!” place than about a billion “Avengers” flicks ever will.

But there is another aspect to the whole Hollywood thing that many artists are really playing with nowadays without straying into the pop culture arena: using technology as a special effects lab. It’s a DIY approach, the media stripped down and looking backwards at art precedents rather than trying to compete with the studios’ big budget productions. Realistic, simple, cheap; but smart. Take Scott Short’s recent work. It transforms X dozen generations of image reproductions into punchy black and white optical events that resemble only themselves. You’ve got digital technology being used the way a number of artists used those early Xerox machines forty years ago, with the invoked memory of pre-color processing — b&w only my friends — purifying the whole thing like Lightning Hopkins just killing it with just his rasp and a nasty old guitar with strings about to break on him.

There really are lots of other examples of this sort of guileless processing of advanced technology circulating through the galleries these days. Get out there yourself, you’ll find some, and see what you think. Next to all the boastful or self-promoting big budget stuff it takes me back to the awkward hand-made paintings, not very large and definitely not bombastic, that so many modern masters of modest means knocked out of the park for generations. Cezanne was no Ingres, but ended up surpassing the great draftsman as a painter of consequence. John McLaughlin couldn’t get a decent still life onto a canvas, but figured out how to make a homemade rectangle sing. Operatically. I’m not out to help destroy spectacle or outsized ambition in art. But damned if I don’t prefer to settle in with an intimate indie flick as opposed to one of them blockbusters.