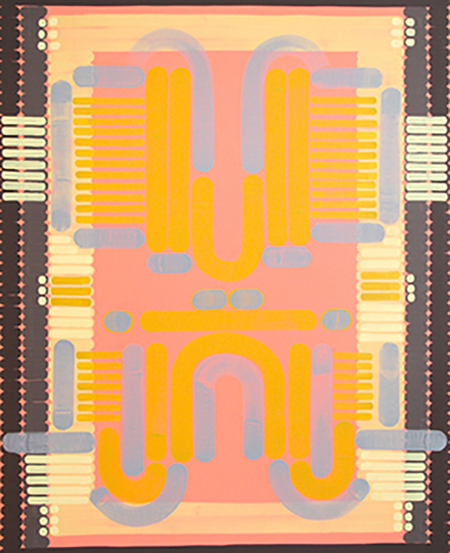 In many ways Nicolas Grenier and Lily Stockman's paintings are perfect complements. They share formal qualities as well as political ideologies, yet the two artists present their concerns in quite different ways.

Grenier's paintings reference visual maps of information that merge abstraction with polemics. They take their cues from data visualizations where gradients are often used to depict transitions from one state to another, often with arrows that flow in multiple directions indicating the different ways that information can move. Under the title "One Day Mismatched Anthems Will Be Shouted in Tune" Grenier creates a suite of paintings in which colors are mixed to form earth-toned gradients sharing space with cryptic texts and looping arrows. Concentric rectangles and broad stripes of color gradations divide the paintings into sections. These sections become "rings of pleasant colors," as one painting proclaims.

While the works have illustrative and diagrammatic features, the data being mapped and visualized is more metaphorical than literal. In "Middle Ground II" thin arrows are directed up as well as down, drawing the eye through the composition. Centered along the horizontal axis is a text in all caps that reads "Toward A Bipartisan Middle Ground." Above and below this text are the same sets of words, though in the up direction they are preceded by ‘your' and in the down direction by ‘my.' Read as mirror images — Whatever, Your / My Opinions, Your / My Convictions, Your / My Righteousness, ending in Fuck You — Grenier sets up a dialectical relationship between Yours and Mine and between color and language across a neutral (or gray) middle ground. The middle ground has multiple meanings as it references the middle point in the color gradient as well as the split in political beliefs.

A work like "Resurfacing Sediments III" is more poetic. Atop horizontal bands that transition from a light greenish beige to a deep orangey brown are words and then phrases that expand in length when read from top to bottom: Here, There, Out There, Way Out There, Where it's Happening, Sediments Are Resurfacing. While Grenier's words have a distinct cadence, they refer to political and social conditions. In "Study for Incoming Flux" three sets of curving arrows appear to grow like vines from the base of a mustard colored rectangular frame. A horizontal band of colors ranging from gray to orange to green to pink anchors the composition yet also undulates behind the frame, blending into it as it reaches the top of the composition. The perfectly mirrored arrows resemble plants moving whichever way the winds blow.

While Grenier's works are intentionally intellectual, Stockman's paintings function on an emotional plane. Her abstract paintings are comprised of simple shapes executed with wide, short brushstrokes. Stockman splits her time between Los Angeles and Joshua Tree, and her colors reflect the tones of the desert. Her palette favors pastel colors and she infuses her works with transparency and washes. The images take their point of departure from the observable world, the landscape, specific architecture as well as from her passions and labors. She breaks down her observations into a vocabulary of shapes and gestures that have become her personal iconography. Stockman's titles are crucial to the understanding of the work. For example a painting whose center is comprised of three orange circles surrounded by a gray border and whose sides are two rectilinear forms also filled with orange brushstrokes is entitled "Mass Ave." The image suddenly transforms from non-objective into an urban landscape. Similar transformations happen with "Baboon" and "Movie Palace," where the dots and dashes cohere to become a face in "Baboon" and the facade of a theatre in "Movie Palace."

Stockman makes reference to Agnes Martin's use of the grid and minimal forms, but her work is more expressionistic than minimal. She explores figure ground relationships, layering rectangles and circles upon a colored surface. Does the figure obscure the ground or the ground cover the figure? By titling her exhibition “Women," Stockman acknowledges the history of women painters as well as the representation of the female form. However her works are more about the process of painting than defining the feminine or safeguarding feminist ideologies. "DTLA" and "Eastern" have the feel of circuit- or game boards with rounded edges created in soft delicate colors. Stockman's paintings are seductive. They challenge conventional representations in order to become unique works that fuse observable and imagined worlds.