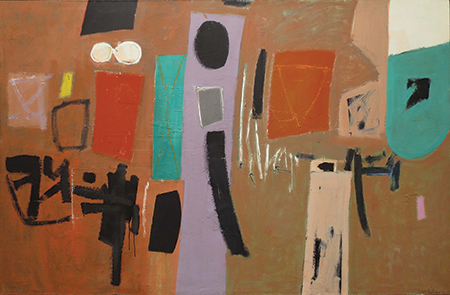 After almost three-quarters of a century of looking at Abstract Expressionist art, reinvented many times over, it is difficult to approach Emerson Woelffer’s impressive oeuvre with fresh eyes. However, it behooves us to remember that he is recognized as a West Coast pioneer of the form, and that his distinctive works are the result of myriad influences and personal sensibilities. Equally skilled in an impressive variety of styles, Woelffer’s paintings, drawings, collages and lithographs incorporate a range of materials.  Included are chalk, charcoal, oil and acrylic paints, roof cement and tarpaper. The vitality of these surface qualities led to a highly personalized brand of Abstract Expressionism.

Born in Chicago in 1914, Woelffer’s education in art started in the 1940s when he attended the School of the Art Institute of Chicago. He later taught at Black Mountain College in North Carolina. It was a school dedicated to a progressive interdisciplinary education, with a focus on the arts. During these years, he was introduced to the innovative works of artists such as Picasso, Miro and Kandinsky. He also had fateful meetings with Jackson Pollack, Willem de Kooning and Lazlo Moholy-Nagy, under whose direction he learned about the elements of Constructivism. But he was particularly drawn to the biomorphic fantasies of Matta and the lessons of the emerging Surrealists.

The 1950s was a fertile period for American artists who were influenced by European Modernists. Breaking from the historical traditions of academic painting, artists were experimenting with techniques that drew from anti-rationalism. Namely, their emerging visionary iconography was geared toward revealing unconscious truths. Through the use of autonomic writing, for instance, they transcended then conventional aesthetics to explore dream states. Woelffer readily absorbed the emotional resonance conveyed through emphasis on the unconscious, particularly expressions of psychological states.

He began to approach his work with a bold spontaneity and a Surrealist tendency to integrate language and imagery. Adding to the dramatic colors and jagged forms of his established abstract style were elements derived, for the most part, from unconscious impulses and mystical associations. He incorporated, for instance, symbols, hieroglyphic strokes, squiggles, letters, numbers, punctuation and calligraphy. Also included were the symbolic use of handprints, a reflection of his fascination with cave painting. If the works here seem fresh and familiar, one has only to look to contemporary graffiti artists.

By embracing this new artistic vocabulary, Woelffer was able to give expression to his many interests. For instance, a life long love of improvisational jazz is notable in the gestural and unrestrained rhythmic syncopations found throughout the exhibition, “Visible Escape” being a particularly effective case in point. Woelffer also had an abiding interest in Pre-Columbian and tribal art. This is vividly expressed in the painting, “Figure.” Its vibrant hues, executed in heavy impasto, exude totemic intensity.

During the 1960s and 1970s his images became considerably pared down. This is particularly notable in his “Poet” series, where slim vertical forms are placed against stark backgrounds. This simplicity is carried through in his later collaged forms. Although the impulse toward collage was apparent very early in his career, they reached a pinnacle of simplification when he began to use strips of paper and glue. A significant example on view is “A Bird for John.” Another of Woelffer’s recurrent themes, the bird is executed with torn black and red paper on a sky blue background.

Woelffer introduced Abstract Expressionism to California when he taught at the California institute of Arts (CalArts) and at Otis College of Art and Design. He brought his embrace of mystery and transcendence to a generation of art students that included, among others, Joe Good, Ed Ruscha and Larry Bell. His legacy, as this exhibition reminds us, continues to remain prevalent.