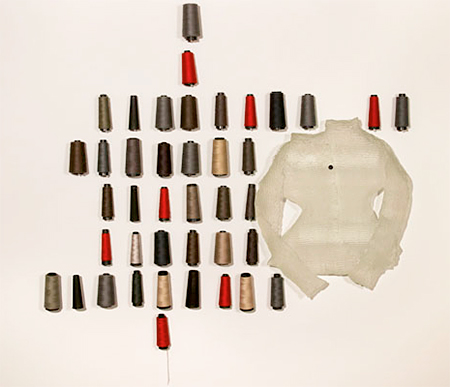 “No more cast-glass hangers!” doesn’t have quite the ring of the line Fay Dunaway immortalized in “Mommie Dearest,” but it gets at the heart of two pieces featured in Cassandra Straubing and fashion designer Babette’s collaborative exhibition, “poetic ghost.” The pieces, entitled “On Monday...” and “On Tuesday, The Garment Worker Hung Out Her Poetic Ghost,” consist of two blouses hung on hangers cast in milky, opaque glass. Here and throughout the exhibition, the dynamic between hard glass and soft fabric played out in myriad permutations. The Bay Area-based Straubing and the single-monikered Babette focus on the motif of the blouse as a historical signifier of gender and power dynamics.

Their artworks simultaneously celebrate the beauty of garments as objets d’art and the craftsmanship of the workers who produce them. But they also lay bare the conflicted expectations placed upon women who buy and wear haute couture or prêt-à-porter. The piece “Her Measuring Tape Had Measured Years and Years of Pleated Garment Fittings,” with its exaggeratedly thin-waisted tailoring, calls to mind another scene-chewing cinema classic, “Gone with the Wind.” In that film, Vivian Leigh is introduced to viewers as Hattie McDaniel laces her into a constricting corset. With an eye toward feminist critique, Straubing and Babette remind us that in the Old South, in 1930s Hollywood and still today, glamorous stereotypes may be inexorably conflated with the construct of femininity. The perceived worth of actual, real-life women is all too often linked to the size of their waists.