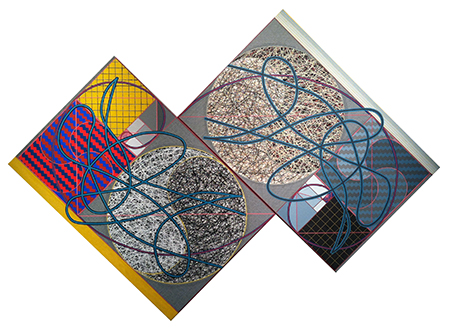 After more than six decades as a working artist, HJ Bott is as interested in formal aesthetic issues as he was at age 17. A brilliant mind coupled with an insatiable desire to research and consider myriad possibilities has resulted in some fascinating work over the years. His new series, “Scribble Morphings,” is the result of research into what are known as the “20 Basic Scribbles,” which were discovered by Rhoda Kellogg and Scott O'Dell around 1970. These are fundamental marks found consistently in the drawings of young children and include variations on single lines, multiple lines, roving open and enclosed lines, zigzag lines, the multiple loop, and the spiral. Years ago, however, Bott and his colleagues in New York came up with four additional scribbles, hence the “24” that the artist refers in his statement. These marks are said to be the building blocks of all written and visual languages across every culture.

The artist’s own theoretical concepts, which he refers to as the “Phenomenon-of-the-LINE” and the “Displacement of Volume System” come into play as well. Bott has long utilized a system of symbols, patterns and modular components in his paintings and sculptures. Two shapes have been the foundation of his work for more than 40 years. One looks like a stylized Egyptian mummy, while the other resembles a quotation mark. This show is no exception, with one major addition. The paintings are overlaid with highly stylized renderings of the aforementioned “scribbles,” including the zigzag line, multiple loop line, roving open line, etc. These reference the rhythmic, repetitive, scrubbing motion common among two-year-olds given markers and paper. Using layers of glazed acrylics, Bott effectively combines the scribbles with his own beautifully articulated forms and patterns. His selection and juxtaposition of color, as well as his meticulous execution, add up to a body of thought-provoking paintings.

In what is approaching his 100th solo exhibition, Bott continues to investigate geometric relationships and archetypal symbols, and is still engaged in ordering space with line. A self-described advocate of the cross-disciplinary use of art, geometry, math and science, Bott would make his Bauhaus, De Stijl and Russian Constructivist predecessors proud.