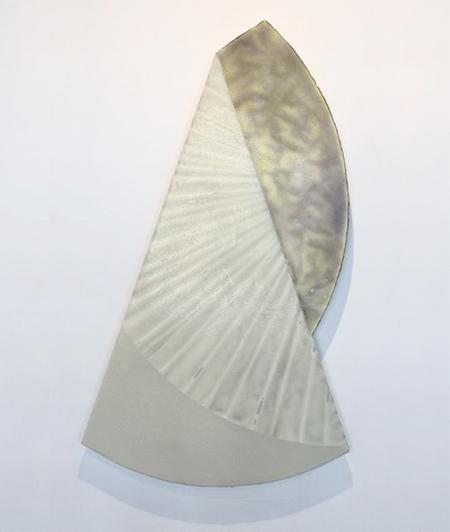 Resin, Plexiglas and pigment coalesce into a luminous minimalism in this survey of Florence Miller Pierce's work from the 1960s through the 1990s. One of the few women in the Transcendental Painting Group based in Taos, New Mexico in the late 1930s, Pierce's work became much more poetic and introspective after her experiments and forays into cast resin shapes and totems. Seen in this exposition is Pierce's quiet geometry, accented with flashes of color and reflection.

Colors that appear trapped below the top layer of resin seemingly glow and radiate as viewers change orientation as they walk around the gallery. Each piece tantalizingly shimmers and thus draws the eye in, but without distracting from other works. The body of work as a whole contains a zen-like quality that inspires quiet contemplation and meditation on their opaque surfaces and profound linearity. Natural light transforms the piece as the day goes by; Pierce's sculptural forms of triangles, circles and dimensional folds omit a milky opacity and later a glittering silver. For those who seek to see more of Pierce's later work, a series of resin works from the mid-nineties can also be found at Site Santa Fe's "Unsettled Landscapes.”