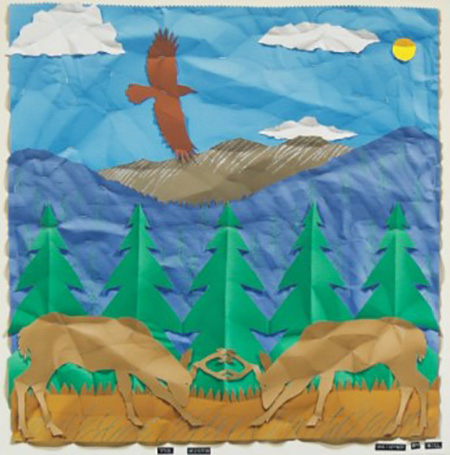 The 58-year-old artist Bill Braun is a practitioner of trompe l’oeil painting, but more than “fooling the eye,” as did 19th-century American artists William Harnett and John Peto, Braun tricks the viewer into thinking he is seeing torn-paper folk-art collages. Looking at first like something someone in an institution or asylum might make, Braun meticulously paints in paper folds and creases, scraps of sheet music notation, and even the artist’s signatures that resemble Dymo labels.

Nature is a recurring theme along with the expected still lifes that echo Harnett and Peto. Spring, summer, fall and winter are invoked with witty, shorthand devices. Is there any meaning beyond the brilliant visual trickery? The artist drolly reminds us of the unreliability of vision and perception. Each acrylic painting is another exercise in straining our credibility. Each pseudo-collage dares us to touch the picture’s surface to determine if it is real paint or paper.

Since the technique has not changed since his 1979 debut at Bruce Velick Gallery in San Francisco, Braun’s growth is more in subjects than manner. One could, for example, compare Braun to other California artists with dry humor who flirt with visual puns, such as Robert Arneson and William T. Wiley, but according to Braun, it was all triggered by a response to abstract expressionism wherein  emphasis is placed on the “tension between the object and plastic space. Trompe l’oeil vaguely parallels — and intensifies — that same tension.”

Besides art of the insane or disabled, children’s art is a more obviously acknowledged influence. Fudging cut-up kraft paper, staples and masking tape, each painting seems a valiant stab at realism, only to be amusingly undercut or deflated by the viewer’s gnawing awareness that everything is staged to look crudely handmade. In effect, such ham-fisted crudity is arrived at with stupefying, repetitive control.

Could it be that — as each painting is constructed on two levels, the real and the fake — our apprehensions of nature are similarly skewed? Braun implies that cartoons, consumer packaging, children’s toys and clothing design, not to mention greeting cards and video-games, re-configure nature into cold, crisply reductive, instantly identifiable images.

“Moose Family” and “Moose Lake” propose, respectively, an idyllic cow, bull and baby moose near a tree about to be felled and a single male with antlers wading before eight identical fir trees in a row. In “Two Bucks” adolescents lock horns in the wilderness beneath a soaring hawk.

Backyard garden scenes tend to be a bit too cute, with dandelion weeds, thistles, sunflowers, and wispy spider webs, but this is a charge too easily made. Braun’s world is unabashedly for smiling and relaxing in, perfect for a summer gallery show. The few still lifes, “Planter and Birds,” “Wildflower Pot” and “Octopus Vase” address decorative patterning to the extent that the pottery glaze seems remarkably real, but then, glaze decoration is its own fake version of nature, a kind of Blue Willow teapot world with weeping foliage and fantasy lovers.