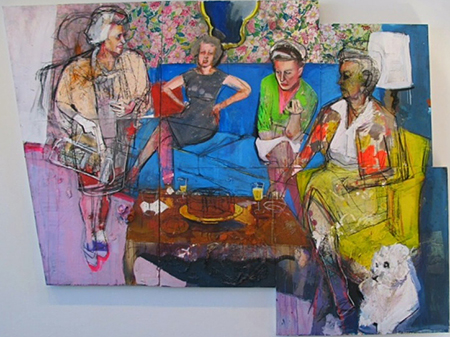 Abigail McLaurin is a figurative artist with an expressionistic approach to painting and an interest in families from the baby-boom era. She likes to work from period photographs that are either emotionally charged or emotionally flat. A background in stage design may explain why many of her paintings are so large that they seem to envelope the viewer, as in “Dead End,” a multi-panel work mounted in a corner that measures seven feet tall by nearly ten feet wide. The speed with which stage sets are usually painted may also have influenced McLaurin’s brushwork, which is muscular — she applies the paint with abandon in some areas, resulting in energizing drips and splashes, as well as wide, visible brushstrokes. Some of her figures’ faces, however, are penetrating portraits executed with great attention to detail.

McLaurin’s small pieces are no less powerful. “Madness Induced by the Flesh” depicts a mother and child with their eyes closed. Rivulets of pink, blue, and black paint nearly obscure their faces, leading one to wonder if they are asleep or perhaps even deceased. The relationship between mother and child is a pervasive theme throughout the show, as are social relationships among children. In “Playing Dead” a boy on a stick horse and a girl dressed in red gaze down on a boy who looks like he is doing more than just feigning death. “Happily Ever After,” on the other hand, focuses attention on a very distraught bride, while “Blue and Permanent” shows a young child wearing water wings floating face-down in a swimming pool. McLaurin’s images of the family always have these dark undertones, and the result is an emotionally difficult, psychologically complex body of work.