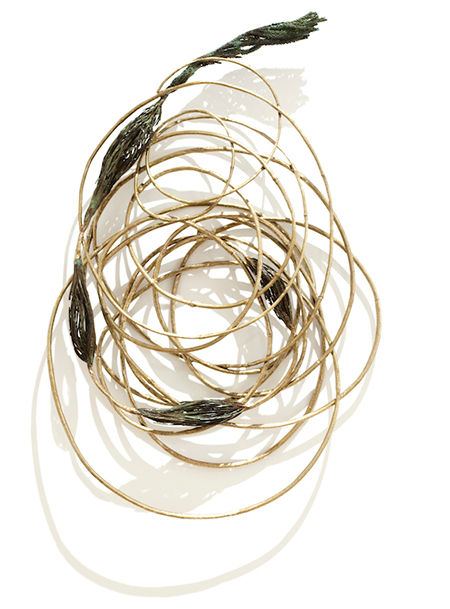 Mimesis, the imitation of reality, has been an aesthetic taboo for some time now; but do artists really have to keep proclaiming their work’s artifice? One who uses mimesis creatively, and magically, is Denver sculptor Yoshitomo Saito, whose "Ethos in Bronze" show is “modest but slightly eccentric,” to quote the artist’s description of Erik Satie’s (1866-1925) music, which applies to both of their aesthetic ethic. Saito’s bronze sculptures are laboriously fabricated by the artist alone at his outdoor studio (sometimes in the snow), using the traditional Italian investment mold technique. He adopted this during grad school, and accepting, probably with a shrug, the label of “lame-duck traditionalist.” Well, everything old is new again, and Saito’s poetic constructions infuse a difficult medium with poetic feeling.

Included in the show are large bronze works that Saito has designated as gnossiennes, meaning musical compositions for dance. These allude to a series of Satie piano pieces from 1890. Saito’s "Gnossiennes: Tall Onlooker" and "Gnossiennes: Fish Net" are symmetrical, vertical-format wall-hung assemblages composed of various bronze vines, branches and roots. The figure emerging out of the former sports a fanlike cluster of leaves for a head and hovers weightlessly above a trailing peacock-like tail. The teardrop shaped net in the latter seems to be releasing rather than trapping the stylized fish, coils of bronze rope above it on the wall; in its irregular reticulations, it also suggests the organic maps and insect wings, although inset with ‘patches’ of gridlike netting; a humorously absurd touch is the bronze caster at the bottom suggesting portability. "Gnossiennes: Beehive Cart" replicates, in botanical terms, an old-fashioned typewriter atop a metal wheeled cart, except that here, the typewriter is a dark log festooned with creeping roots, and the cart is woven from sticks that are as carefully balanced and propped as the kindling arranged for a campfire. A manic spiral of vine erupts from the central mass, aptly symbolizing the incessant swarming of the hive.