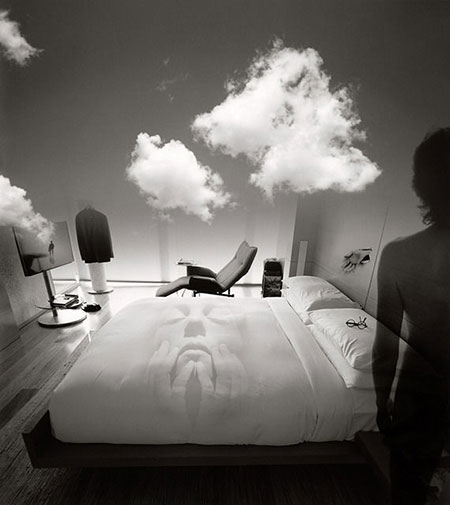 Long before Photoshop was created in 1988, Jerry Uelsmann was manipulating multiple negatives in the darkroom to create distinctive surrealist photomontages. Now 80 years old, he became interested in photography when he was 14 and started creating the dreamlike images he is known for in the late 1950s. This exhibition includes vintage gelatin-silver prints dating back to the late fifties and sixties, as well as photographs from nearly every decade since. Using multiple enlargers and a selection of negatives from the large archive of images he has created, Uelsmann is able to produce exquisite photographs such as the 1969 “Untitled" print of a large tree hovering above a small island. For this piece, Uelsmann used five different negatives — two for the tree, two for the mountainous landscape, and another for the large seed pod submerged in the water. In a more recent photograph, “Burden of Dreams” (2012), he portrays two figures standing in a cloud-filled room containing a bed, a mid-century modern lounge chair, a mysterious painting and pair of glasses. A ghostly face projected onto the bed seems to be the dreamer. The lounge chair, as well as the distinctive spectacles, suggest Sigmund Freud, who believed that dreams are the key to the unconscious and can provide insight into a person’s neuroses and how to mitigate them.

Like Surrealists Max Ernst, Rene Magritte and Joseph Cornell, Uelsmann uses unexpected juxtapositions to produce startling and enigmatic effects that may alter the viewer’s perceptions of reality. He refers to what happens during his long hours in the darkroom as “alchemy,” a magical process that is as intuitive as it is technical. In “Journey Into Night” (2006) a tree growing from a street of bricks becomes a pair of hands cradling a bird’s nest that holds a single egg. In “Place of Several Mysteries” (2009) a pair of hands frames an abandoned church occupied by a ghostly figure. Distinguishing him from Surrealism, time and again, Uelsmann’s powerful images also express a spiritual connection with nature, a reverence for life, and a belief in a higher power.