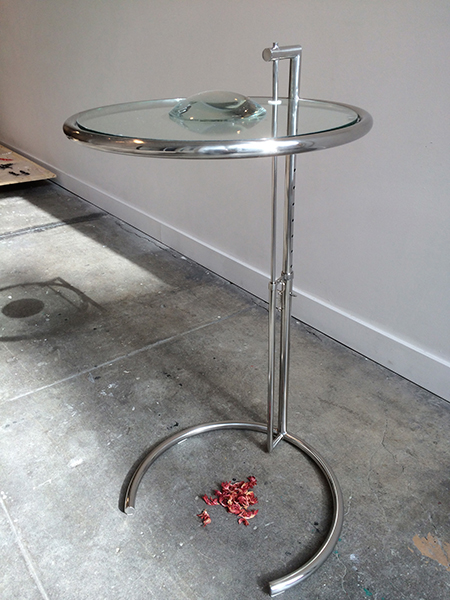 One of those shows where everything seems swept off someone’s studio floor and redistributed in the exhibition space, Marc Dombrosky slowly reveals many delectable secrets in his multi-faceted art. Half the show is embroidered-over, found, handwritten paper scraps. It is a genre Dombrosky has perfected through a careful selection of which notes to embroider. He favors statements of regret, outrage, relief, profanity and love. Either the viewer imagines the life story of the original note writer or posits an extraordinarily itinerant road trip by the artist in search of these enigmatic and elliptical messages.

Trained as a painter in such far-flung academies as Ohio State (MFA, 1999), University of Florida (BFA, 1993) and the School of the Art Institute of Chicago, the 43-year-old Ohio native soon dropped that traditional discipline in favor of his long-time obsession with other people’s business. Embarrassment is key to experiencing the aesthetic thrill through their laboriously sewn-over words on paper scraps. Conceptual craft, as it is often called, has redeemed the fiber art field and attracted new attention now that more men are doing it. Without any feminist agenda, Dombrosky is the Kerouac of fiber art, an angel of lost, written trash. However, it is real trash, not the tinkered literary form of trash in Kerouac’s “On the Road.” Closer to Diane Arbus, Garry Winnogrand and Glenn Rudolph, photographers who are somehow simultaneously detached from yet empathetic to the downtrodden, Dombrosky engineers pathos into each piece by his choice of message and then agonizingly copies in thread the pleading and panicky or defeated and resigned notes.

The other half of the show consists of freestanding sculptures, also of recycled materials. Their tone is tremendously encouraging and often slyly hilarious. While the layout of the scribblings on the tabletops is random, the pedestal- and shelf-pieces are more considered compositions. For example, three found and inverted highball glasses are from Las Vegas casino trash; each reveals a shriveled walnut, as if parts of a street con game. Gay British pop singer George Michael is spoofed by suspending spools of his cassette tape from the wall, dribbling it down into a phallic, science-lab glass beaker. Another frail and delicate wall work could be a makeshift sculpture attempted by one of the note writers: a deflated balloon hangs at the end of a four-foot string with someone’s lost key chain.

More interesting, a pair of Ray-ban sunglasses covered in barnacles is absurdly set on a thin children’s edition of Homer’s “Odyssey.” Like the Greek legend, the sunglasses confronted the sea — and survived. Most shameless and effective of all is an “improved” version of Irish designer Eileen Gray’s iconic 1924 E-1027 adjustable stainless-steel side table. Its thin lines and tipsy daring fit right into Dombrosky’s embrace of what might be called the unbearable afterlife of objects. Crumpled cactus flowers are ceremoniously dumped beneath the clear-glass tabletop to which has been added a large convex glass lens. Unreliability of vision? Instability of perception? Dumbing down lofty modernist claims? All of the above come into play.

One other accumulation could point the artist in a new direction: turning penal paraphernalia into art to draw attention to the injustice of youthful incarceration. Lifted from the Clark County Detention Center in Las Vegas, seven discarded plastic personal-possession bags have had the identifying names embroidered. Memorials, perhaps; remembrances and warnings, too. The names cover all ethnic types, leaving the viewer with sadness, admiration and bleak hope. Dombrosky’s dedicated sewing will continue to resonate deeply so long as such conditions persist. Such an acute, issue-focused subject does suggest a possible winding down of the more generalized nomadic losers brought to mind elsewhere in the exhibit.