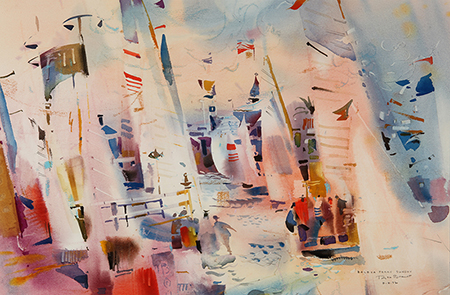 There is a reward for focus: specialized investigation reveals insight that is different from a broad sweep of inquiry. For the Laguna Art Museum that focus is deliberately California art and artists, and for Rex Brandt (1914-2000), that focus was unequivocally California light. The result is a tight, well-deserved retrospective of some fifty paintings — mostly watercolors — that cohesively brings together a body of work and local knowledge about a quintessential Southern California artist.

A native Californian, Brandt chased the sun. Born in San Diego, schooled in Los Angeles, Riverside, Berkeley, Palo Alto and Long Beach, he settled in Corona del Mar for the bulk of his career (though eventually slipping off to the San Juan Islands in Washington in his later years). Brandt painted the “sensation of the scene” and in California that sensation nearly always involved sunshine. "Balboa Ferry Sunday" (1972) shows vivacious light, both diffuse and sparkling, on sails gaily tilting in the wind. The energy is fresh and the small dappled color shapes, as much as they flutter on the surface like confetti, resist abstraction. The white of the paper is as important as the washes of color and strokes of line.

Brandt’s work and legacy is steeped in local history. Not only did he paint the sea and sun — obsessively — he was also an actively engaged member of the Southern California art scene, promoting and teaching art wherever he went. He was an early member of the Laguna Art Association and helped found the Laguna College of Art + Design. Brandt taught painting, specifically watercolor, for nearly forty years out of his home and published more than ten books on the subject. He seems to have been one of those teachers who taught not because he had to, but because he loved to. Furthermore, Brandt was a good friend and mentor to the important local collector, E. Gene Crain. One of the most significant collections of the California School, the Crain collection provides deep resources for any exhibition involving the White Paper Painters, California Group and California Water Color Society which included Brandt, along with his peers Phil Dyke and Millard Sheets among others. It is notable also that the curator of the retrospective, Janet Blake, curated Crain’s private collection in the 1980’s and knew and appreciated Brandt personally as an intellectual artist. Working closely with Laguna Art Museum, the Crain collection was showcased in a 2002 exhibition that highlighted Dyke, Sheets and of course, Brandt.

Although Brandt was exhibited widely, lauded and acquired by prestigious art institutions during his lifetime, his renown today is rather narrow for a respected artist whose work has been exhibited at the Met, the Corcoran, and LACMA. While some of his earlier regionalist works, such as "On the Road to San Jacinto" (1938), are considered part of the canon of historical American art, Brandt himself regarded later, stylized and expressive paintings such as "Afternoon Sun" (1986) to be more representative of his mature work. A lack of wider recognition today may be partially due to his ease in accepting commercial illustration jobs for magazines and newspapers; his commitment to teaching and writing books on watercolor; and even his choice of medium, for watercolor is often overlooked as a secondary medium. Brandt embraced his ability to turn his designing aesthetic towards more lucrative artistic paths, especially while supporting his family. To put it bluntly, there can be an uneasy negation of “real” art by the very act of making “commercial art,” although this is not a difficulty that Brandt acknowledged: “I think there is an esthetic timelessness to investigative and reportorial art as a epitomized in the writings of Mark Twain, the drawings of Goya and the prints of Hiroshige.”

There is an interesting difficulty in parsing out the paintings Brandt created specifically for his classes, whether for demonstration or modeling, from his serious works. In this, curator Blake conscientiously includes specific examples of paintings-made-for-teaching in the catalog, but reserves the wall space for the paintings that reveal how Brandt perceived himself as an artist, as Blake says, “in his soul.” Heavily influenced by the Abstract Expressionist Hans Hofmann, Brandt was torn between the more conservative descriptive regional approach of his time and the abstraction of light and form. Evidence of struggle appears throughout the show, tendencies towards semi-abstraction appearing during all stages of Brandt’s career. Although he often stressed the importance of painting the sensory experience, he never quite made the leap to pure abstraction.

Intended to be a comprehensive retrospective and accompanied by an in-depth catalog, this exhibition provides context and a good look into the rich body of work of a major regional artist. Brandt’s last major retrospective was nearly 50 years ago and, although he was included in the LACMA show "Made in California; Art, Image, and Identity 1900-2000” (2000), it was ironically an older oil painting, “Surfriders" (1959) that was chosen for inclusion. "Rex Brandt: In Praise of Sunshine" is an opportunity to see historical regional works such as "On the Road to San Jacinto" as well as "Strong Light and Magic Night," both darker more expressive 1968 works, as well as totemic stylized works such as "Afternoon Sun" (1986). Wrote Brandt, “Watercolor is the perfect medium for depicting air, water and space — the sense of bloom, the spontaneity of life ...”