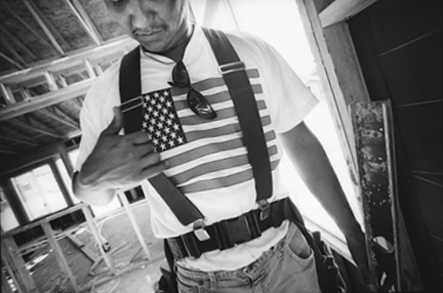 Art photography, photo journalism and advocacy blend into a compelling photo show “Vanishing Points.” It features work by Sant Khalsa, Stephen K. Lehmer and Douglas McCulloh. McCulloh’s “Dream Street” series searingly documents the demise of arable land due to ever-expanding tracts of suburban housing on one hand, and the travails of the workers who build and market them on the other. The “Dream Street” series skewers whatever illusions one may harbor about the myth of the “American Dream.” Khalsa and Lehmer crisscrossed the plains of middle-America photographing what is left of once thriving communities in Kansas and Montana. Khalsa went through Kansas in 2002, taking stark, black and white pictures of school houses, banks, post offices and remnants of Main Streets, now more common on movie sets than in actual locales. She has a knack for exposing the irony inherent in descriptions of "the heartland” such as a flag pole, bereft of a flag and with a dollar sign replacing the traditional eagle atop. In the face of abandonment and decay, she shows how nature, if nothing else, is reclaiming the land.

McCulloh’s work is the antithesis, all about people, the ones who build the suburban tracts that the luckier among the 99 percent hope to call home. “Dream Street” is an actual street name, one the McCulloh got to pick out in a raffle to help out homeless. Armed with a camera and tape recorder, he deftly documented the realities of the developer’s paradise, which turns out to be more of a worker’s hell leavened by unflagging hope and perseverance. The images of immigrant workers, like the window installer getting maybe a buck per installed window, with their abridged wall text, steal this timely and well curated show.

Lehmer’s “Montana Hi-Line” series is visually quite beautiful, while also speaking of abandonment, this time compliments of the Great  Northern Rail Road that in its heyday ran from St. Paul to Seattle, with artificially created townships lined up every six to ten miles of the route. Once the line eliminated stopped, the once thriving towns slowly died, a process that Lehmer, a Montana resident who witnessed this first hand. Bathed in morning or late afternoon light, the images of abandoned buildings of those towns and grain elevators once operated by corporate farming concerns engage the intellect as well as provoke emotions.