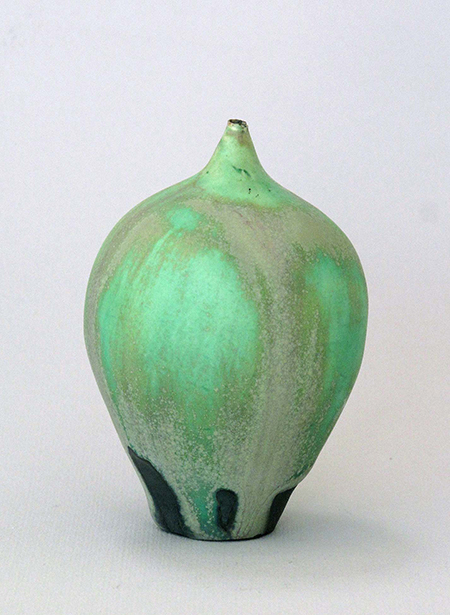 Cupping a piece of ceramic by Rose Cabat is unexpectedly sensual – the finish she has perfected, her own formula, feels like goatskin suede. She calls them “feelies” and rightly so. They are are  small, just a few inches tall, and fit nicely in the palm of your hand. The fineness of their touch is due to the special glaze and also to the porcelain body. Some are round, shaped like a fig or an onion, and some are lean, but all are in a vase form. Only that the opening at the top is so small and delicate that you will not be using it to hold a flower or anything else. There will also be a few bowls included among the “feelies” in this show. They are rougher in appearance and shape, but here the surface, with its thick applications of fused glazes, is also seductive.

Cabat turns 100 this June 27, so this show is entitled “Rose Cabat: 100 Years,” and remains active — several of the pieces here date from last year. With a little assistance she throws and glazes all these “feelies” and the bowls herself.

She achieves her unique finish in stages. She probably does a bit of sanding or smoothing after the first, or bisque firing. The glazes are layered, with colors melted over and around one another — you can see how they pool at the bottom of the vessel if you turn it over. Cabat tends to favor warm colors, often earthern tones, but she also has a penchant for lavender, turquoise, and green. One of her special glazes is called “onion skin,” and indeed it looks like the reddish brown outer skin of a small onion. The “apple green” glaze is the vibrant bright green of a Granny Smith apple.

Back in the late 1930s, the artist was drawn to her practice by happenstance, when her husband and later collaborator, Erni, brought home some clay to make some plates from.  She recalls coiling as a pottery technique and made such good objects that Erni decided to give her a membership to the Greenwich House Pottery in Greenwich Village, New York. Later they moved to Arizona due to their son’s health, and eventually they bought an electric pottery wheel, which she still uses today.

In 1957 Cabat studied glaze calculation at the University of Hawaii — the use of glazes is so technical that one does need formal education. Afterwards she and Erni developed the “feelie” glaze, and a few years later Rose developed the forms she thought suitable for such a delicate touch. Over the years Cabat became nationally recognized in ceramic circles. In 1966 she was part of the “Craftsmen U. S. A.” exhibition at LACMA, and in 1969 she was included in “Objects U.S.A.:  the Johnson Wax Collection,” which went on international tour under the auspices of the Smithsonian Institution. This show included Ron Nagle, Jun Kaneko and Ruth Duckworth, and questioned the traditional divide between art and craft — ceramic objects, of course, had been long relegated to the realm of “merely” being craft. We know better now.