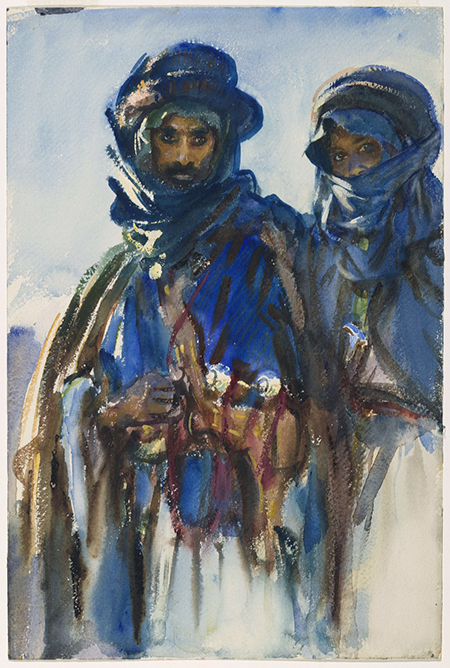 John Singer Sargent had no desire to exhibit or sell any of the dazzling watercolors that appear in this show, but his American friend Edward Darley Boit talked him into it. Sargent reluctantly agreed to exhibit 83 paintings in New York alongside those of Boit on the condition that he would only sell them as a group. Consequently, the Brooklyn Museum got the entire lot for $20,000. Three years later, Sargent showed 50 more watercolors with Boit, and those in turn were purchased by the Museum of Fine Arts, Boston.

This is the first time that the two collections have been exhibited together. Nearly 100 watercolors are arranged in three large galleries by theme, which include Italian villa gardens, Venice and harbor scenes, portraits, Middle Eastern Bedouin nomads, summers in the Swiss Alps, and the Carrara marble quarries. In the fourth and final gallery are a number of Sargents owned by Houston collectors, as well as one of Sargent’s traveling watercolor cases.

Sargent did his first watercolors around the age of 12 or 13, and as he grew older he used the medium to record his travels throughout France and Italy. In 1902, he abandoned the oil paints and high-society portraits he was best known for to focus on watercolor. As in his younger days, he used them to spontaneously capture his surroundings as he traveled, working en plein air. For a decade, Sargent traveled and worked incessantly — for him, there was no such thing as a vacation from painting.

Sargent’s watercolors are loosely painting and perfect for capturing the European wanderings of the artist and his entourage, which often included his sisters, beloved niece, and friends. These traveling companions played an important role in many of his paintings, looking as though he had captured them relaxing when in fact they were carefully posed and sometimes even dressed by him.

Sargent would spend the summer months in the Switzerland and work his way through northern Italy, ending up in Venice in October. He loved the city of canals, and these are some of the most beguiling paintings in the show. Many were painted from a gondola; sometimes he includes a glimpse the front of the boat in a composition.

Sargent would sketch out his compositions very lightly in pencil, and these marks can be seen through layers of sheer color and areas of white. A watercolorist is judged in part by the way they handle white, and Sargent is a master, using wax resist in some areas, opaque white in others and also allowing the white of the paper to show through. In the fall of 1911 he spent several weeks in the mountains above the town of Carrara, sketching and painting the whitest marble in the world. His stonecutters are dwarfed by sheer cliffs of the pristine stone, and Sargent delighted in capturing the effects of sun and shadow on their faceted surfaces.

A particularly strong group of paintings was done on a trip to the Middle East that included Jerusalem, Beirut, and Syria. From September 1905 through January 1906, Sargent traveled through the Ottoman Levant, painting and sketching the nomadic Bedouin tribes that moved across the expansive desert. In “Bedouins,” one of the most powerful in the series, the intense gaze of two hooded figures silhouetted against a blue sky beckon the viewer to come closer and marvel at the artist’s genius in capturing the moment.

Sargent’s watercolors are as fresh as Alpine air and as translucent as Venetian water. Many of the landscapes and seascapes exude a sensual, languorous quality, while the informal portraits of various “types” he would encounter seem to be a welcome departure from his earlier formal portraits. The pleasure Sargent took in working with watercolor permeates the entire show and leaves the observer with a similar sense of delight.