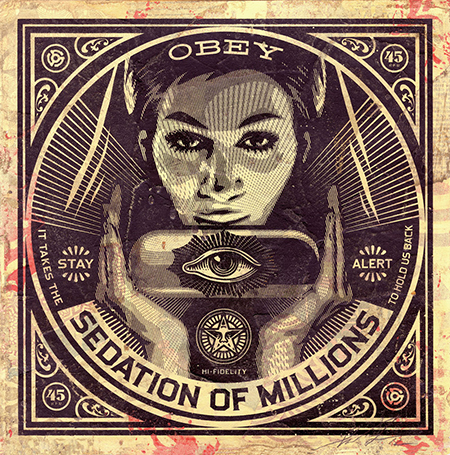 Street artist Shephard Fairey owns an extremely rare copy of an early and hilarious example of a mash-up in music: a diminutive 45 rpm cut in 1978 by Little Roger and the Goosebumps, who combined the words of the theme of Gilligan’s Island with "Stairway to Heaven" by Led Zeppelin. Led Zeppelin sued Little Roger, the record disappeared, but the mash-up lived on and became the basis for contemporary DJ-ing, not to mention for Fairey’s approach to appropriated art. The bricoleur-in-chief of Los Angeles, Fairey is best known by the general public for his early work, the Obey stickers and posters featuring André the Giant. Then came his controversial breakout moment, the Obama “Hope” poster. But his recent style is far more elaborate, complex and decorative. "50 Shades of Black" features his original and nostalgic album covers, which quote the extinct poster style of the Russian avant-garde Constructivist Gustav Klusis and the dead languages of decorative arts, such as Chinoiserie (revived by Mark Dean Veca), Art Deco, and Steampunk. Fairey has managed to reclaim these styles and reshape them into a signature look that is distinctively his own.

Fairey’s art deliberately replays Klusis, who was a master of dynamic linear agit prop, but the borrowed styles of these album covers mourn the loss of the album covers that announced the music of Joan Jett and Sid Vicious to Fairey’s generation. "50 Shades of Black" is a nostalgic revival of the format for imaginary records that are no longer being made. We live in an age when art that we grew up with is vanishing and the modes of producing that culture are becoming extinct. It is rare and shocking when an art form virtually disappears, but the once vital complementary art form of the album cover has been consumed by digital downloads, where album art shrinks from a commodious twelve inches to a thumbnail. The art of the album cover was one of the most distinct and recognizable marks of the youth culture to which it was dedicated. These covers were for us and they belonged to us.

Ranging from the jolly mid-century modern style of the first album cover artist, Alex Steinweiss, who designed for our parents and grandparents, to the first truly contemporary cover, the Peter Blake and Jann Haworth montaged Beatles’ "Sgt. Pepper’s Lonely Hearts Club Band" album, the twelve inch cover for a vinyl record marked the passage of our lives and our tastes in music as we turned from rock to punk to hip hop. Fairey, now graying at the temples, grew up with FM radio, which guided him to create a massive music collection. Now a conservator of a dying culture, a historian of popular music, Fairey’s new album covers are inspired by his own 4,000 plus collection of vinyl records and their heirloom covers. Like his earlier show at Stolenspace in London, the public is allowed to peruse Fairey’s collection, to remove the records from the covers, to place them on turntables and to then put on headphones and listen to the songs of childhood and to be transported back in time. The artist, who has been arrested sixteen times, believes that “art is for sharing.”

With their obsessive linear insistence on horror vaccui, these album covers channel the tattoo art of the dispossessed. Pushing aside the censorious and corporate music makers such as Columbia Records, that once so hampered the album cover artists, Fairey, as usual, goes his own way and creates his own company: Obey. At once label and logo, Obey and Third Eye of Sound records and album covers look past rock ‘n’ roll back to the 1930s. In that era, the usual cover was just a plain brown paper sleeve for the black record, and Fairey’s colors stay strictly within that tan and black color scheme. Art Deco lightning bolts flash and surround an old-fashioned mic; an old record carefully held in a man’s hands is offered to the viewer, anachronistically promising “stereo.” A circular medallion, in turn, offers “hi fi,” an ancient term; another cover warns “It takes the Sedation of Millions to hold us back;” and the “Obey Sound System” celebrates with “Vive le Rock” and “liberté, egalité, melodie,” which “can also be played on mono equipment” we are assured. Obey Records presents an old wooden radio that has a turntable under its lid, completing the recreation of a vanished world. Like the radio/record player, the now extinct record store will be raised from the dead for a month to beckon the visitor to join in a chorus of “Long Live Rock” or “YMCA,” the first record in Fairey’s collection.