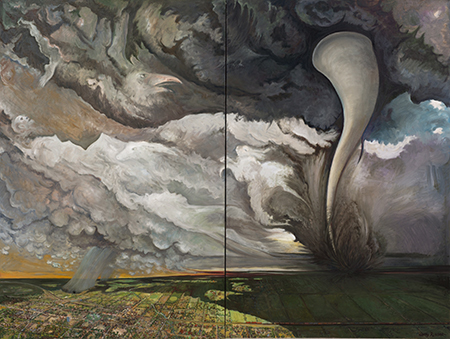 For decades, art has been an essential aspect of Santa Fe’s cultural character. And while the city isn’t the bohemian frontier it once was, its creative spirit endures thanks in part to organizations like the Center for Contemporary Arts, whose 35th anniversary coincides with a reprisal of the institution’s 1977 Armory show.

Multidisciplinary artist Robert Gaylor helped found CCA in the 1970s. For him, there was an urge to “create a forum for artists whose alternative visions weren’t often found in commercial galleries and performance spaces … it was clear that there was a vital artist constituency and enough of a sophisticated and curious general public to drive this vision.” Though classically trained artists first came to Santa Fe in the mid-1800s, there wasn’t an art colony to speak of until the beginning of the 20th century. By the mid-1900s, Canyon Road and its surrounding neighborhoods were home to artists like Gustave Baumann, Will Shuster, Fremont Ellis and John Sloan, all of whom established themselves as serious painters of Southwestern landscapes and culture.

Though Santa Fe had artist studios and a smattering of independent galleries by the 1970s, commercial and public exhibition spaces were limited. In part, this paucity led to the organization of the1977 Armory show. Loosely modeled on what critic Barbara Rose called “the most important event in the history of American modernism” — New York’s 1913 Armory Show — Santa Fe’s version gathered emerging and established artists alike for an event that participant Eli Levin called "a euphoric whirl … every artist and art enthusiast in town was there."

CCA’s 2014 show is in the original Old Pecos Trail location, which the U.S. military built as a tank restoration warehouse during World War II. “It’s a survey rather than an exhibition,” explains CCA’s director Erin Elder. “We gathered original members and founders of the first Armory show to select participants for this one, but it’s more of a community showcase than a historical exhibit.” The show features the work of over one hundred artists, and though a number have gallery representation, a great many more are independent, making it a unique platform for genre-defying New Media artists like David Stout, who notes that “Galleries in general tend to be behind the curve and are not particularly knowledgeable about emerging practices.”

Roughly twenty percent of CCA’s 2014 artist roster participated in the 1977 Armory show. Painter John Fincher is one of them. A resident of Santa Fe since 1976, his dramatic, color-drenched landscapes embody the freedom and creative spirit that so many associate with Southwest environments. Of the 1977 exhibition, Fincher says, “We were young; it was an exciting time here, when the contemporary scene was just taking off.” The chance to show next to established artists represents a career-validating coup for younger ones. Designer and illustrator Todd Ryan White, who is in his late twenties, says “I definitely look up to artists [and 2014 Armory exhibitors] like Janet Russek and David Scheinbaum. They’re amazing mentors and great photographers.”

The selection process of artists for CCA’s 2014 iteration was largely based on recommendations from other artists, an approach that mirrors 1977 procedures. For Elder, this was a crucial aspect of the project: “The original Armory shows were sort of outside the gallery and museum structures. We tried to respect that sense of independence.” The stipulation that participating artists must reside in Santa Fe is in keeping with CCA’s regional focus. Autumn Dawn, of the art group The Soft Museum, graduated from Santa Fe’s Institute of American Indian Arts in 2010, and cites New Mexico’s “legacy of ingenuity and creative lifestyles” as primary influences in her work. While members and alumni of Santa Fe’s youthful art collective Meow Wolf make up a sizable chunk of the under-35 set, Elder is quick to point out that these younger artists maintain distinctively individual art practices.