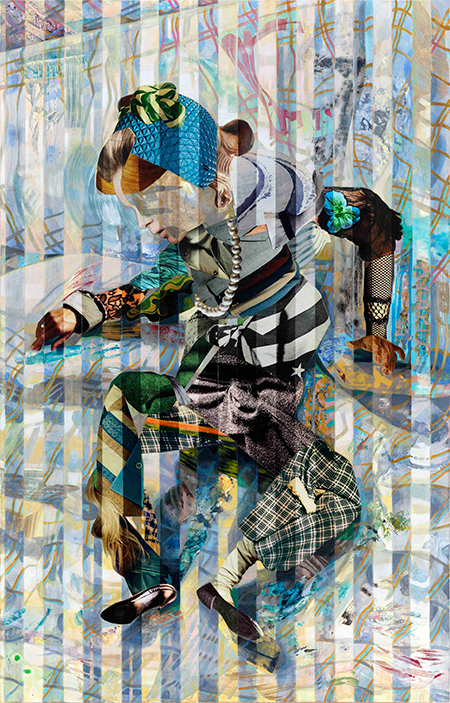 For over 30 years, prolific artist and influential teacher Mary Lou Zelazny has been known for her ability to deftly intertwine the mediums of painting and collage. Though the artist has her roots in the Chicago Imagist tradition, as evidenced by her liberal appropriation of pop culture imagery and her emphasis on the deconstructed figure, Zelazny’s is a long career built upon her own singular vision. Domesticity, gender, sexuality, art history and myth are amongst the topics traversed within her practice.

Here, Zelazny’s collage is employed in two forms: via found material and that which she creates. The foliage of “The Eyed Tree” explodes with color, self-reflexive in its language of cut out drips, blots and smears from what seems like a hundred different paintings. Her figures, though, are rendered decoupage-style; in works like “Motor Control Blue,” images snipped from print media compose the subject. With an adult face, but tiny hands and feet, combined with an outsized head, the figure appears simultaneously womanly and childlike. This ambiguous agelessness parallels the manner in which the pictures of plaids, tweeds and lace fabrics on her body are indicative of no era in particular, making her both a product of Western culture, and an entity independent of it.