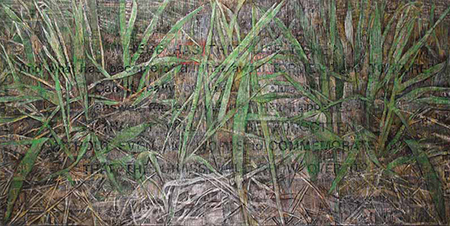 The three artists in “Surface Tension” share a similar process in that all three work in multiple layers, but the results are very different. Houston artist Lydia Bodnar-Balahutrak exhibits two large mixed-media paintings in which tree limbs create a framework of intersecting lines and shapes. In the powerful “Shrub,” she applies layers of gesso, charcoal, and collage to an eight-by-six-foot canvas. The collaged medium below the surface creates a surface texture with a linear quality that suggests tree bark, thereby reinforcing the imagery of the painting. “Tangles,” from the artist’s "Hide and Seek Series," is much more complex, in that the skein of white branches hovers above a collage of politically charged news articles. One headline reads “The True Cost of War,” another “Dangerous Liaisons,” while other perceptible words include “death” and “intrigue.” Political commentary has always been an integral part of Bodnar-Balahutrak’s work.

Also Houston-based, Gwendolyn Plunkett shows ten small but commanding encaustic and oilbar paintings. Encaustic is made from beeswax, resin, and pigment, while oilbar is oil paint in stick form. Five of the pieces include the word “skin” in the title, because human skin provides inspiration and a point of departure for many of Plunkett’s paintings. The translucent nature of the encaustic, as she builds it up on the canvas, provides glimpses of figures and body parts below the surface, as well as suggestions of plants and other organic shapes.

San Antonio master printer Jon Lee’s mysterious white-on-white woodcuts are printed on paper that he makes himself with tools that he fabricates as well. Lee explores the fine line between something and nothing, pushing the limits of printmaking to see just how minimal he can make his images and still communicate his ideas. The titles give no clue to the subject matter, but eventually it becomes apparent that the prints depict movie credits with the names “whited” out. Juxtaposing these three artists, who have spent many years investigating and manipulating materials and ideas, works well with this recently opened alternative space's founding concepts. All three have reached the point in their careers where their work reflects confident control of both.