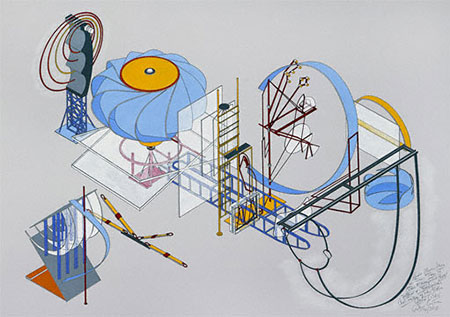 Alice Aycock, "Hoodo (Laura)" from the Series "How to Catch and Manufacture Ghosts"–Vertical & Horizontal Cross-sections of the Ether Wind (1981), 1990/2012, watercolor and ink on paper. Collection of the artist.

Viewing the creative process of a gifted artist can be a fascinating study for peer artists and audiences alike. Knowing how artists create is intrinsic to understanding them on a deeper level, even if their process has no effect on how their work is received. Nor is the viewer required to be a devotee of a particular field of style to appreciate the artist’s journey, especially when that journey is, in itself, intriguing.

Such is the case with Alice Aycock, whose extensive collection of conceptual drawings is on display in “Some Stories are Worth Repeating.” Organized by the Parish Art Museum and curated by Jonathan Fineberg, the retrospective includes over 100 works from 1971 to the present that highlight Aycock’s major themes and explores the concepts, research and minutiae of execution that served as the foundation for some of her most impressive works. Even more so, seeing the way in which her ideas were generated – some blasting through like  red-hot, ricocheted riffs off a seemingly disparate subject, others slowly germinating from best laid plans gone awry – is a compelling example of embracing intuition.

If you are already a fan of Aycock’s sculptures, you’re familiar with their often futuristic themes that dance along the edge of fantasy and science. In her inkjet and watercolor print from the series “Sum Over Histories" entitled "Timescape #5 Over the Landscape of the Pacific Ocean" (2011), recognizing that the piece grew from the artist's interest in the quantum theory diagram of physicist Richard Feynman, as well as her subsequent obsession with the possibility of time travel in which she envisioned living a different life with each new jump, seems essential. Once we are aware of this, we can see in the drawing how deeply Aycock considered this fantasy in the warped aerial map of the world she received from NASA and then ribboned over and over in blue and yellow trails representing looping time journeys. Even the movement of the terra firma was given consideration and is charted with earthquake markers, fault lines and illustrations of core samples with hatch-marked bedrock.

While this piece did not ultimately become sculpture, the formula used to create it is signature Aycock. Early in the 1970s, she briefly focused on mazes after reading in the World Book Encyclopedia about an Egyptian labyrinth used as a form of penance for criminals. This research resulted in the building of her own circular maze on a farm in south central Pennsylvania, where she hoped to create for any participant the feeling of panic that came over her when she became lost on an old jeep trail in Utah. The metaphor, she realized, was also applicable to the interstate highway system, and thus furthered her exploration into the concept of “the road as a segment in time [as] a kind of lived history” in subsequent works.

Blueprints for indoor pieces are also included in the exhibition, such as drawings for the stunning wood and steel ship-like "Machine that Makes the World" (1979) installation, which are especially intricate. Other creations remain affixed to paper, such as "Babylonian Devil’s Trap with Magical Inscription for Protection Against Lilith" (1988), a marvelous talisman of burnt orange, spiraling ancient letters that play with our mythical subconscious.  Prototypes for her most recent work – again, dealing with time and space – prove to be the most gripping element of the show. When viewing the rather terrifying tornado of metal ribbons whirling around in "Super Twister" (a digital design for a sculpture for the University of Cincinnati), it’s clear that Aycock’s process for materializing her artistic compulsions remains potent and profound, and any glimpse behind the scenes is invaluable.