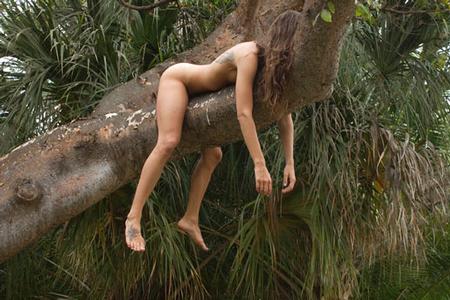 Spanning nine-and-a-half decades, "Unveiled:  Nudes" is a meditation on the enduring form of the female figure as seen by eight historical and contemporary artists. On the west wall of the back gallery, the show unfolds in clockwise chronological progression, beginning with John Sloan’s 1920 painting, "Nude on Red Velvet." In keeping with the Ashcan School’s emphasis on everyday vignettes, it’s very much of its time, the subject’s wavy flapper hair betraying her vintage, though the conceit of a comely woman languid and recumbent amid the suggestion of crushed velvet telegraphs a poor-man’s odalisque: a harem fantasia minus the peacock feathers and Moorish lanterns. Henri Matisse’s lithograph "Nu assis les bras éntendus" is an anticlimactic inclusion in the survey. It gets overshadowed by a piece that in many ways is more Matisse-like than “The Fauve” himself: Gaston Lachaise’s "Kneeling Nude" (circa 1940s). Although devoid of color, this pencil-on-paper study is an étude in bold, fleshly contours and economical lines.

There is a rare figurative painting by AbEx sculptor David Smith, rendered on ungessoed canvas to impart a direct, stained immediacy. This austerity is offset by the artist’s signature, scrawled with the blunt end of a paintbrush into a luxuriant smear of cerulean. Poignantly, this work was hung in the current show fifty years to the day after the piece is dated. Robert Hanson’s bland pencil studies tend toward the anemic, but Stephen Hayes’ untitled monotypes resplend with creamy brushstrokes in his "Man/Woman" series on deckle-edged paper, with their violent whirls of kinetic motion.

Malia Jensen’s photographs of a nude dancer, part of a series entitled "Jungle/Woman (Captiva Suite)," were taken during the artist’s Robert Rauschenberg Foundation residency on Captiva Island, Florida. The works vacillate between cheesecake (the model lying soulfully back upon semi-tropical foliage, breasts bared, eyes closed, palm fronts positioned strategically as de-facto fig leaves; another honing in on toned buttocks showered in honeyed light) and more substantive, feminist-inflected fare. In perhaps the show’s most provocative pieces, the model hangs limp and seemingly lifeless, draped over tree branches. Yes, her body is young-ish and supple, but to all appearances, nobody’s home; she is a discarded talisman, once worthy, the lens proposes, of a sidelong ogle, now abandoned. This is challenging, even harrowing work.

Seattle-based Joseph Park’s oil painting "Hallucination C" presents a woman’s form obscured behind a sprawling network of psychedelically hued tubes. With its labyrinthine sinuousness, the work is just abstracted and polemical enough to wax allegorically (we invoke the ghost of D.H. Lawrence) about the essentialized nature of “femininity.” It is unlike Park’s other works included here: the mannequin-like "Kimberly Reading" and "Q," both more beholden to Cubism and both consequentially more formalist, less visceral, in their appeal. Overall, this is not a show highlighting vérité conceptions of the body à la Nan Goldin or Larry Clark. With the exception of Jensen’s work, it is a rigorous, effective, pointedly classicist exploration of flesh and bone at the fulcrum of architectonics and corporeality.