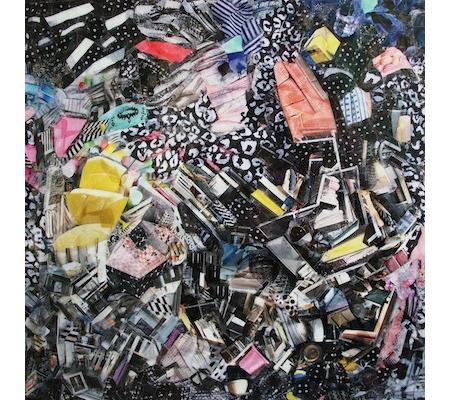 Anyone who has read the manifestos of the art movements from a century ago cannot help but be impressed — and, occasionally, amused — at the utopian fervor of these radicals in combat with the prevailing conservative, hypocritical and outdated cultures of the day. While we are all aware of Modernism’s failure to create a truly rational, scientific New Man, it is obvious that modernism triumphed in the art arena; even if the current Zeitgeist embraces ironic self-deprecation rather than braggadocio, art from that period remains relevant and still crazy even after all these years.

Daniel Healey’s recent tape-collage montages are a case in point. Although the Oakland artist has been working with shredded bits of magazine catalogues that are laminated with ultra-transparent tape, the new show, entitled "Sorry Entertainer" (borrowed from a song title by Daniel Johnston) treads new ground with its resurrection of — dear me — illusionist pictorial space, that old taboo for abstract painters. Healey’s previous cut-ups (to employ William Burroughs’ term) were exuberant arrays of colored paper patches resembling scattered jigsaw puzzle pieces that coalesce into vertiginous tidal waves or gigantic geological heaps; or, conversely, larger forms dissolving into their constituents, with their commercial sources sometimes discernible. I used the word “trashscape” to convey the wry, humorous no-holds-barred flavor of this joyful clutter.

If Healey’s technique of recycling junk mail into apocalyptic tangles had environmental, anti-consumerist implications as well, the artist rejected any such sociopolitical agenda; in a recent Stretcher.org (http://www.stretcher.org/features/a_conversation_with_daniel_healey/) interview with Theo Konrad Auer (who curated Healey’s 2010 Oakbook gallery show) Healey cited movement as his main goal — a perverse desideratum for so intricate and laborious a process (but perhaps no stranger than Morris Louis pouring liquid acrylic paint over huge bolts of canvas in, if I have it correctly, a room the size of a large closet).

Seeking “more expression and gesture” in the new work, and even a psychological dimension, Healey has constructed montages that resemble Cubist fractured spaces, with their sliding planes and air of perpetual metamorphosis, and certain works employing Surrealist automatism, e.g., Pollock, Ernst, Masson and Matta. Healey: “I've been interested in a specific gap of abstraction that occurred between abstract surrealism and abstract expressionism, stylistically speaking, for quite some time, and look to achieve this in some of my more recent and visually complex images. There is a flatness and illusionist depth that is in limbo within these examples, as well as suggested imagery that doesn't quite evoke anything.”(Other Cubist-era suspects: Léger, Severini, Meidner and Picabia.)

Healey’s virtuosity with scissors and tape may be less evident in the new work, which in general, is darker and moodier, its black backgrounds suggesting deeper meanings than bursts of flowers or fireworks. Some of them may even remind viewers of Dutch floral still lives, conveying to ruminative viewers the transience of time and beauty; others, with the colored forms seeming to rise from the inky matrix, suggest flotsam from some marine disaster, or the plastic plankton accumulating in our oceans. A sense of purpose informs these seemingly chaotic aggregations of objects despite the artist’s absurdist titles (“guerrilla noise junk,” “authorless recovered memories,” Picass0 and Braqu3,”  “paainting or college,” etc.). How the artist achieves this sense of flux and transformation with his modest but restrictive materials is a mysterious miracle. If some of the works suffer when they grow too large, causing the ingredients to subside into the primordial soup, or when Healey jokingly applies lamination to minimalist forms, the majority of the nearly forty works here, vivid plasmas, are a real step back to the future. Despite the exhibition title, these painterly montages constitute visual entertainment of a high order, requiring no apologies.