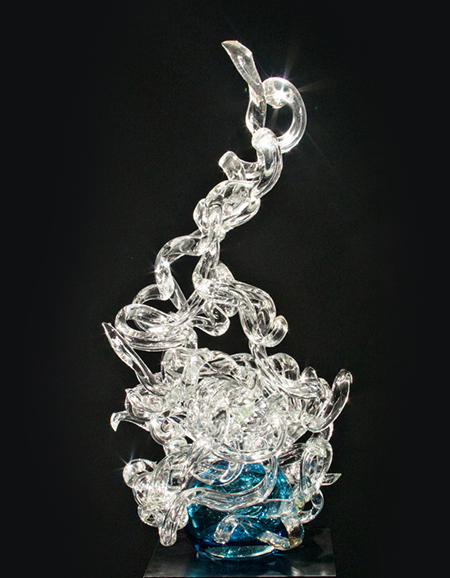 Dale Chihuly’s new series, the “Rotolo,” or “coils,” is his first since the recent “Silvered” series wherein vase interiors were silvered to reflect like mirrors. The new work draws more on the notion of transparency or clarity rather than reflections. With their extravagant piles of coils above much smaller and flatter vase forms, the “Rotolo” are Chihuly’s most abstract work to date.

Nature and ecology have been the threads of meaning that tied all Chihuly’s work together, building on floral imagery, for examples, but also leaves, tree stumps, and misshapen shrubs. While the analogy of organic growth could be applied to the new work, too, the sparse color and absence of green push the “Rotolo” closer to a spontaneous piling on of dozens of clear or red-colored, turned coils of glass.

Even though he emerged in the 1970s as a post-minimalist and is of the same generation as Dennis Oppenheim and Eva Hesse, color, materials and visibility of fabrication have always been more important to Chihuly than loose, dripping or drooping forms. However, the three new works on view have a leaping vitality that extends post-minimalism beyond the entropic materials of latex, wood or grass. In this sense, they sustain an experimental quality that nakedly exposes the virtuoso blowing process which, in a way, becomes each artwork’s subject: its own making.

With the earliest “Venetians” and “Persians” (1988-90), Chihuly stretched the limits of exactly how many coils could be blown on the pipe at one time. The results outdid historic Venetian glass examples but, by employing authentic Venetian masters such as Lino Tagliapietra, Chihuly indirectly amplified the achievements of Italian glass, too. By pushing the limits of glass, he is able to topple over into a fine arts category, in his case, a kind of wildly chromatic, highly materialized expressionism, also evidenced in his museum installations (such as those at the new Chihuly Garden and Glass next to the Space Needle) and a few public art pieces.

Chihuly’s most tightly focused show in years, the debut of the “Rotolo” series is also one of his smallest shows with three sculptures and three paintings or “drawings,” as the gallery calls them. Chihuly’s activities as a painter have been overlooked, perhaps because they often refer so closely to the glass. Each drawing — one charcoal and two acrylics — averages 42 by 30 inches and has a cream, black or white paper background with curving, coil-like clusters of lines. Bearing in mind that the 72-year-old artist must do the drawings to hand to the glassblowing team to get them started, they are indeed tied to the sculptures, but, in my opinion, they also stand on their own. Over the years, they have taken on a character and stature of their own, thawing the frozen movement of the finished glass pieces into something more immediately exuberant-looking. Often exhibited as entire walls with dozens of examples, to see three of them alone adds simplicity and monumentality (The new “Rotolo” drawings also coincide with a new publication, “Chihuly Works on Paper,” 3 vols., Abrams.). While each centered cluster alludes to the glass works, gestures or other images such as fire — another unifying trope — come to mind.

“Rotolo 124” with its blue base could be a fountain spouting water or splashing upwards. “Rotolo 80” sizzles in orange-red and is an easy metaphor for flames. Finally, “Rotolo 100,” with its all-clear base and masses of coils (like Chihuly’s haircut?) reminds me of the decorative arts curator at the St. Louis Art Museum who once told me years ago that she could acquire anything she wanted so long as it was white, black or clear. In this case, “Rotolo 100” would be perfect. Not to worry, Chihuly’s more colorful pieces are in hundreds of art museums all over the world.