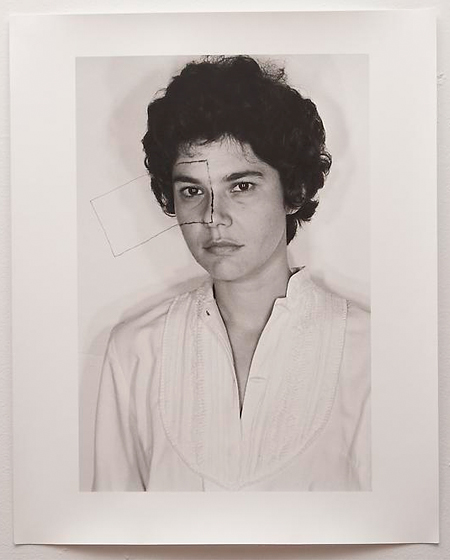 “I arrived at the conclusion that, when one tries to say a lot, one reaches a limit; but silence, on the other hand, holds infinite potential.”

If you go to this show expecting to see Liliana Porter’s endearing creatures, clever toys, or sometimes maniacal figures, you will be surprised. What you will see is a small but significant collection of early works created between 1968 and 1974, the earliest completed a few years after she arrived in New York from Argentina at the age of 22. The show includes prints, photographs, and installations that are conceptual and surprisingly austere. They provide insight into the way Porter handles space in later works.

In “Untitled (Nails)” (1973), for example, Porter attached four small nails to the wall and suspended four thin wires between the nails and the floor. “I began creating absences (using shadows) and thinking that I could use images that were in themselves sort of meaningless,” she said in a recent interview. Even though the wires and their shadows are barely perceptible, there is an elegance and intelligence to the piece that is oddly appealing.

In the series of five photographs that comprise “The Square” (1973), Porter drew lines on her hand and on five sheets of paper and then positioned her hand on the papers so that the lines join to create squares. In “Square I,” the square surrounds the tip of her index finger. In “Square II,” her middle finger enters the square as well. By the final “Square V,” the square has migrated to the center of her upturned palm. The series is an intriguing self-portrait in which the hand of the artist interacts with and then becomes one with the art it creates. In the related “Self-Portrait With Square” (1973), you see a serious portrait of the artist, a rectangle half drawn on her face connecting to another drawn on the wall.

In a conceptual, interactive piece entitled “To be Wrinkled and Thrown Away” (1969), Porter attaches a tablet of printed paper to the wall. She invites the viewer to rip off a piece of paper, wrinkle it up, and throw it on the floor below the tablet. Over the course of the installation, the pile of wrinkled paper grows larger, eventually becoming more interesting than the original piece. This is a departure from the more typical expectation that it is forbidden to touch the work of art.

In a new book of interviews with Porter entitled "Liliana Porter in Conversation with Inés Katzenstein," Porter talks about what it means to be a Latin American artist working in New York. At the age of 22, she had a stopover in New York en route to Europe and was so intrigued that she ended up staying.

"A typical minimalist work of art would have been inconceivable, absurd, and I would even say ethically questionable, if created in a Latin American country," Porter says in the book. New York offered a freedom that Buenos Aires, where she was born, and Mexico City, where she spent time growing up, did not. Even though Porter has created most of her work in New York, she continues to show in Latin America and Europe and still considers herself an Argentinean artist.