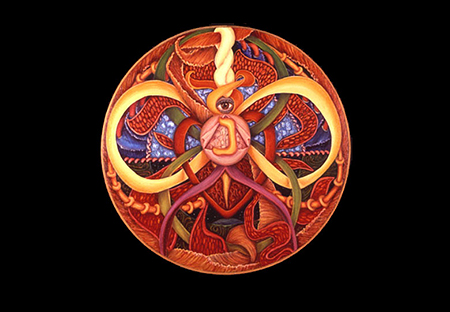 For almost two thousand years, dominant Western culture understood that the spiritual realm was to be imagined - and visualized through art - as the heroic acts of Jesus, the disciples (minus Judas, of course) and the many saints who sought to follow in His footsteps. Masters from Michelangelo to Caravaggio to Rubens painted visually dramatic depictions of miraculous human acts. But at the dawn of Modernism, Western culture's art and religion severed their historic association. There is no longer a universally, or even widely accepted way to portray sacred matters.

Which must have made it extraordinarily difficult to curate an exhibition on how contemporary artists depict the spiritual, what curators Meg Linton and Carolyn Peter call the "Third Realm." And yet they've done an extraordinary job in assembling work by 34 diverse artists, including everything from mandala-like images by Gilah Hirsch, to psychedelic portraits of trees by Linda Vallejo, to wood/glass/encaustic/resin sculptures by Dani Tull that resemble spider webs made solid and dimensional. Linton and Peter chose works by very well known artists (there are several prints by John Cage, three elegant assemblages by Betye Saar, and a powerful video by Cheri Gaulke) as well as young artists with little exhibition history.

No doubt fewer than half of the artists will be familiar to even informed viewers. Some of the exciting introductions for this writer are Cliff Garten, who builds sculptural forms from salt-like crystals, and Dane Mitchell, who speaks spells into blown glass and installs the vessels on altar-like tables. Ruth Ann Anderson uses oil pastel to enact monthly meditations on the full moon. Annie Buckley's collage work serves as a vehicle to reconsider the Major Arcana of the Tarot in terms of mass media photography and print. Kenzi Shiokava inserts a century plant spike into a palm truck to erect a compelling sculpture covered with spiky thorns; it becomes a beckoning but unnatural (perhaps supernatural?) biomorph. Liza Ryan uses photography to capture haunting flashes of light. Christina Ondrus's uses graphite-etched words and phrases to describe the ineffable. David Lloyd's tornado-like evanescence spirals out of an old chair, its pearly surface covered with evocative signs and symbols. The silent screams of Alicia Henry's fabric-based, mixed media masks are among the most ominous and unforgettable images in the exhibition.

The art maps a "Third Realm" that ranges from plant to mineral to human, from earthly to heavenly, from the peaceful, meditative interior to the far and threatening beyond. It demonstrates the wide - and sometimes incomprehensible - range of spiritual expression in contemporary culture.

Artists from the Middle Ages, Renaissance, and Baroque imaged the world as the dominant culture of those eras understood it. In contrast, today's artists imagine the "Third Realm" in personal, private, and often idiosyncratic ways. For this reason, viewers will be rewarded by long and carefully considered contemplation of the artworks. This is NOT an exhibition - or more accurately a pair of exhibitions - to be rushed through, but to be met in silence, with open heart and uncluttered mind.