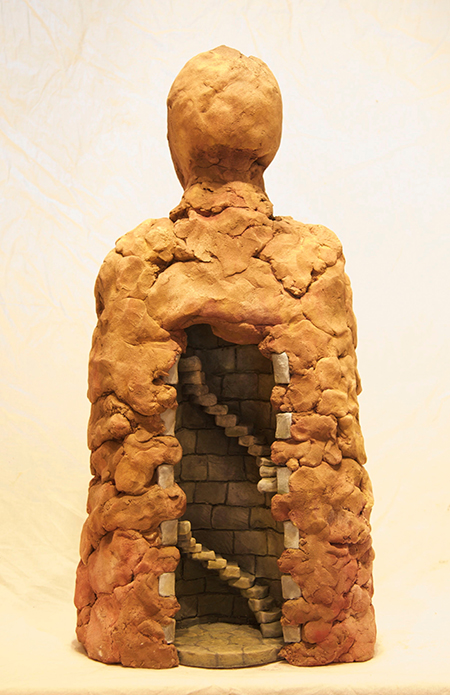 William Catling may be creating clay figures but, rather than being replicas of the human body, they are closer to his personal concept of the human spirit or soul. Throughout his work we tend to see elongated with faces unattributable to any race, creed or gender. Bereft of arms (at times tree branches or approximations of wings substitute for limbs) they do not seem to stand on very firm ground either. What seems to keep them in place is an implied determination to stand their ground, however tenuous. In addition, works like “To Sustain the Atlantean Vessel” also feature a vessel or container carried by the figure on its head. Whether this prop presents a blessing or burden is for viewers to decide. Placid features give nothing away.

The same can be said about “Listening to the Winds Moan through Sunbaked Cliffs.” Here the figure appears somnolent, standing on a narrow ledge of a crumbling wall. But rather than experiencing a sense of imperilment, we feel at peace with the image. The artist has always expressed an ambivalence between solidity and the ephemeral, earth and heaven or suffering and exultation. Through his art Catling has pondered exactly on which side of these divides most people ultimately belong.

The works exhibited in "Measure of Duration” suggest that the artist has somewhat changed course. Figures are no longer reed thin but solid, comparatively bottom heavy, still roughly textured like the formative clay Adam that is suggested in scripture, still armless and without legs. The figures are designed to relate to the surfaces around them, such as pedestals that Catling has also built from pine wood stained to represent the striations of the earth.

It turns out that, since boyhood, Catling has had a fascination with rooks, the chess piece in the form of a castle. He has applied the concept to his rook-shaped figures that to him represent man’s need to build fortresses, either physically or spiritually, so as to establish boundaries to retreat behind. “We dwell within who we are,” he says. But retreat is evidently not the sole option. While the front of the figure features the accustomed rough-hewn body and placid face, it’s the back that fascinates. Catling has built staircases and doors, even a minuscule stained glass window, into places where arms would normally meet torsos (“El Portal” and others).

“Spring Gate” bolsters the concept. Here a true replica of the inspirational chess piece is built into the base of the figure, and the face betrays a hint of expression suggesting something like “come hither, I dare you.” The piece suggests that Catling is slowly shifting from overtly expressing the angst arising from pitched battles between material and spiritual, to the search for more secure footing or resolution. The figure’s face suggests a measure of contentment, its clay chest physically spills over the castle wall and the stairway up its side leads to a door.

Previously, Catling had approached the dichotomies between closing off and accessing in his familiar Giacometti-thin figures whose spines morphed into ladders and staircases. These formal elements served to deepen, rather than solve mysteries. The current work strives to come to terms with the fact that suffering is part of human existence, that it can be overcome, even embraced in some way. The old Lutheran hymn “A Mighty Fortress is our God” wafts through one’s consciousness.

Catling embodies the ephemeral side of his spiritual explorations through a series of boats. “A Prayer for the Long Journey Home” harbors a miraculously intact bird’s nest, bringing to mind the story of the infant Moses being found abandoned, floating in a reed basket. Catling suggests that while the castles keep us safely in place, grounded, the boats take us on a journey into the unknown. As many times throughout his career, Catling catalyzes our own journeys, hopefully listening to our own inner voices while looking at the physical manifestations of his.