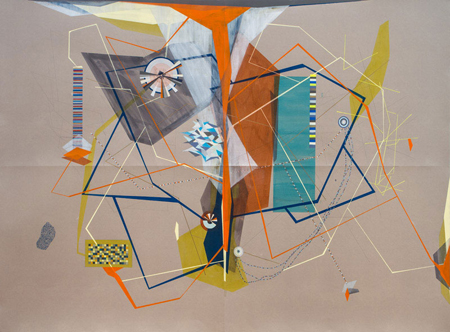 In Somerset Maugham’s "Ashenden" spy stories (which are based on the author’s intelligence career), the narrator ruefully reflects on his mission to sabotage the nascent Russian Revolution: “The reader will know that I failed.” Of course, the modernist ideas about revolutionary abstraction espoused by Russian Constructivists did not fail at all (at least until the Revolution reversed direction); the gospel of geometric abstraction was spread by artist refugees to 1930s Germany and France, and then 1950s America, where it flourished mightily —that is, until 1980s Postmodernist apparatchiks branded it bourgeois formalism at the service of the capitalist world state. Such are the vagaries of art and politics. But the old (or should we say new again?) religion resurfaces from time to time.

Dannielle Tegeder’s "The Library of Abstract Sound," comprising six large drawings and a hundred small ones (accompanied by computer-generated music) draws on the century-old vocabulary of rectangles, concentric circles, and clustered triangles afloat in an indeterminate flat pictorial space. At the current cultural moment, the timeless aspect of such iconography is counterbalanced by our cognizance that abstraction produced neither, as was once hoped, better people nor a better world. It simply rationalized aesthetics and industrial culture — the Machine. Tegeder’s re-examination of a style no longer considered utopian or revolutionary thus provokes a bit of nostalgia in our rootless getting-and-spending times for the conviction and passion attending such Wordsworthian "creed[s] outworn."

Tegeder’s beautifully rendered architectural scrambles (deconstructed ruins?), executed in mixed media on large sheets of heavy colored drawing paper, bear mock-pompous names in the Dada spirit: “Fakontech: Golden Structured City with Machine Plan Universe and Method Angle Main Triangle Planet with Crystal Code.” To these satirical yet nonetheless wistful evocations of failed aesthetic theology she adds a technological element: each of the small drawings, which are mounted on shelves, like industrial commercial products, is accompanied by a computer-generated animated version. An accompanying musical score of notes, chirps and tweets play on an adjacent monitor: unfrozen architecture, not-so-still lifes. Will the Computer will save us, even if the Machine failed? Stay tuned.