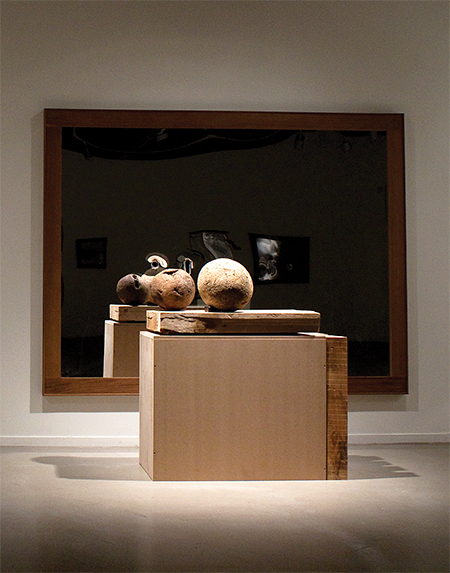 In 2010, Jordi Alcaraz had his first solo exhibit in this country, at which time it was hailed as "one of the ten best shows in California." Three years later he's back. If this is your first encounter with Alcaraz' work, chances are you'll be "captivated" - no, make that "transfixed" - by this Spanish artist's unfettered imagination. In fact, I've never seen anything quite like this fascinating imagery. It has a conceptual presence, but I kept wondering what the "concept" was behind such mysterious, provocative, mixed-media creations.

Combining the skills of painting, drawing, sculpture, wood-working, and assemblage, Alcaraz wraps some of the works in plastic, while others are framed more conventionally behind glass. Minimalist in approach, each work is given a title rich in association: "The Models of Matisse," "Conversation between Self-Portraits," "To Capture Ideas," and "Exercise of Disappearance." These names assigned to his work are as elusive as the imagery.  Or are they?

Surrounded by over thirty of Alcaraz' enigmatic creations, visitors might feel like they're in an "altered state" of consciousness; indeed, "Altered States" is the title of this exhibit. A rich array of ideas are evoked, all circling around an invitation to contemplate what and how we see, experience, and intuit. Surfaces are torn, pierced, peeled back, punctured like bullet holes, or ripped down the middle. Sometimes it seems that the artist's physical, ephemeral, existential, and peripheral worlds are all one-and-the-same.

Viewers may gather that a hidden political/social/environmental reference is suggested in Alcaraz's subtext. In light of Spain's history since World War I, and the rapidly growing continuum of "cultural knowledge" since his birth in 1963, Alcaraz pushes aesthetic boundaries to a degree that marks a noticeable generational shift. Decomposition, negative space, and void are certainly dominant formal factors, and Alcaraz harnesses them to envision a universe that provides its own very open-ended metaphorical doors.

Though each work may be individually enigmatic, taken together they effect an absorbing coherence that is downright spellbinding.