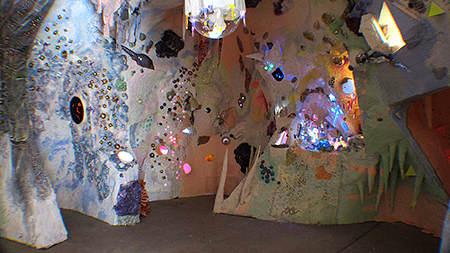 The Santa Fe art collective Meow Wolf took three months over the summer to transform the entirety of Thomas Robertello’s West Loop storefront space. Meow Wolf is made up of a fluid roster of artists and for "Nucleotide" 18 members combined their efforts. A network of full-scale plaster caves houses a world of outerspace-underwater creatures and habitats. "Nucleotide" is actually Meow Wolf’s smallest installation to date, though it is nevertheless extraordinarily encompassing. Atop a framework of wood, poultry fencing, cardboard and custom electrical work, the plaster cave walls extend from floor to ceiling, end-to-end across the space, seamlessly replacing the gallery’s traditional white cube layout with crusty surfaces covered in neon palettes, handmade objects, found material and interactive pieces that glow and hum.

While "Nucleotide" is overall a delightful, candy-colored labyrinth of discovery, up close many individual components are also strange and disorienting. Near the entrance of the space, the exoskeleton of a gigantic insect sits behind a curtain of delicate lace. The translucent head of an eel protrudes from an opening in the wall, colorful plastic morsels trapped within the cast resin. Tubes and tunnels run bewilderingly throughout the space.

Regular visitors to the gallery will realize that a hole has been burrowed through an existing wall, its interior blanketed with astroturf and Lite-Brite bulbs. Another hollow features a small mirror at the bottom reflecting back your face as well as creating the illusion of depth.

There are enough variations within the individual encounters of "Nucleotide" to decipher the hands of different artists (for instance, the particularly exquisite environment built by longtime Meow Wolf member Caity Kennedy from a sea of acrylic fingernails and bouquets of Q-tips), though Meow Wolf’s goal is to eschew individual authorship in favor of the collective. They largely succeed in doing so. Some objects in the installation were made in advance, though the bulk of the installation  was conceived on site.

The level of mastery that it takes to improvise a work that necessitates such engineering cannot be overlooked, especially considering the intended unification of so many disparate voices. Aesthetically, most elements of "Nucleotide" work together in harmony, though an occasional “blue note” diverges, imbuing dissonance and tension. A series of vintage-looking photo collages sticks out awkwardly from "Nucleotide’s" otherworldliness, as does the installation in the cubbyhole at the back of the gallery that’s normally referred to as the “project space.” Just as the viewer is being lulled by the trancelike experience of "Nucleotide’s" imaginary world and soothing soundtrack, stepping into this narrow room jolts one into a heightened sense of self. Motion sensors coordinate a viewer’s movement with loud, rhythmic mechanical noises, while the foiled walls and mirrored ceiling confront the viewer with one’s own image. This reality check of self awareness helps drive home the fact that "Nucleotide" is not just a romp of artistic whimsy, but a large scale contemplation of viewership within an experiential artwork.