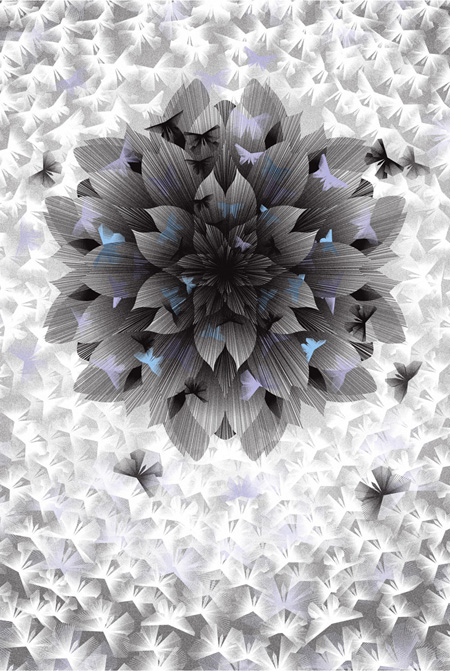 Kai and Sunny are an artistic duo originating from the UK whose work blurs the boundaries of art and design. After careers as independent designers, the two men teamed up to create an artist collective that allowed them to utilize what they learned from their previous experiences for installations, murals, and prints. Their current work is mainly inspired by nature and literature, although there are hints of subversion and deception within seemingly innocent symbols and forms.

The monotone screen prints that make up the current exhibit are all based in line and quite elegant. "Sycamore Seed" is typical. The entry points are the actual seeds, which are carefully patterned and spaced on the paper. Darker seeds are detailed and appear closer, while the faintest of seeds dissipate into the background. Ranges of thick and thin lines run across the entire piece, which creates an abstract atmosphere and additional depth. The sycamore seed with its wing-like silhouette is known for its movement as it falls to the ground like a helicopter. However, this rotation and fall is frozen and unnatural in the print. The seeds do not fall downward as they are positioned sideways or upside down and spaced evenly through the piece. The patterning evokes M.C. Escher without the play on perspective. The image is about the perception of nature rather than a scientific observation.

David Mitchell, author of the novel "Cloud Atlas," contributes a short story that reacts to their piece "Lots of Bit of Star." It was the short publication "The Reason I Jump" that influenced the entire exhibition and allows us to understand it as a cohesive collection of works. Written by a thirteen-year-old autistic child, Naoki Higashida's is a sincere and touching voice not often heard in describing the difficulties of living with autism. A question and answer book combined with short stories, the text speaks of the autistic traits and how wrong we are when we assume solitude is what autistic people want. Higashida writes poetically about his frustrations to control his body, the need to speak, and the need for companionship and happiness. He writes: “When I’m jumping, it’s as if my feelings are going upwards to the sky. Really, my urge to be swallowed up by the sky is enough to make my heart quiver.” Kai and Sunny contributed visuals to the original text. The text highlights that the innocent nature of their work is laced with happiness yet not without rough patches.

"Smashed Dandy" is a particularly strong composition that speaks to dualities such as light/dark, soft/hard and real/abstract. The dandelion is a flower head that is a composite of many small flowers or florets. Kai and Sunny’s dandelion faintly resembles this flower because it’s made up of small triangles with lines bursting from the vertex angle of every triangle and protrudes to the base of each shape. Collectively they originate and burst outward from a black hole that is the center of the flower. As they radiate outward, the individual triangles are easier to identify.  A flower that is soft and delicate looks hard and dangerous in the details. The sharp angles, stiffness, and bursting motion are menacing. Much like Picasso’s use of sharp lines and form in "Les Demoiselles d’Avignon," it speaks of danger and discomfort. Yet because the piece utilizes soft gradations and imagery that symbolically is peaceful, the aggressive undercurrent is subversive, a tactic that they used to great affect.

While the sharp contrasts are apparent in many of the duo’s works, the piece "Migration South" offers a romantic contrast. A flock of birds fly from right to left in the horizontal piece amidst a current of lines. The result is a lyrical, if not an ideal portrayal of flight. Less bird and more symbol-oriented, the result speaks to the motion and idea of defying gravity. The ever-present lotus flower of Shepard Fairey is treated with Kai and Sunny’s sharp and dynamic lines in a collaboration piece. Collectively they reinvent Fairey's ubiquitous Obey graphic with a refreshing twist that is less harsh.

Kai and Sunny’s strong graphic aesthetic translates well into the professional design world. Their surface treatment of prints could easily be dismissed if the visual characteristics and juxtapositions were not fully explored. Simultaneously balancing the serene with the violent, the result is dynamic and a well executed display of visual grammar. Holistically the prints on display are most successful when they balance the real and the abstract, an act that teeters within each piece.