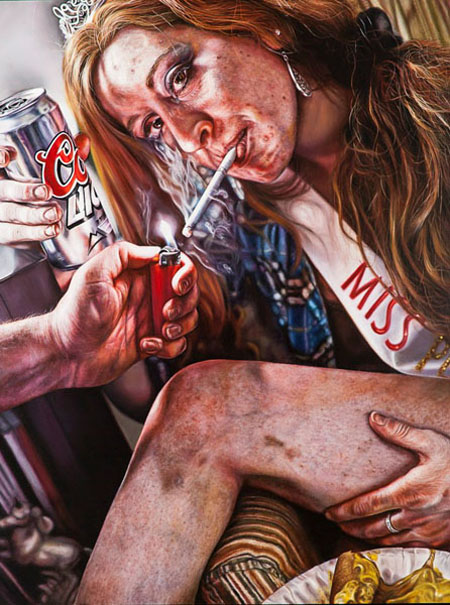 The Coors Light cans, Marlboros, “$2 Only” pork rinds, frayed denim skirts and wife-beater tank tops in Indiana-based artist Amanda Elizabeth Joseph’s paintings are as dominate in the compositions as the female figures they adorn. These are unmistakable signifiers, meant to inform us exactly to which socioeconomic class these women belong: what’s popularly referred to as “white trash.” Despite the use of these blatant stereotypes, Joseph’s treatment of her women is neither sympathetic nor exploitative. Instead, Joseph challenges us to asses the individual preconceptions we bring to the subject matter.

Joseph has long been preoccupied with the imperfections of human flesh, which she renders in hyperreal style. More exaggerated than real life, yet more true than caricatures, Joseph’s women bear deep pores and angry blemishes on their faces. The folded-over waistbands of their jeans reveal midriffs that are scarred and bruised. We cannot help but intimately scrutinize these women’s bodies, though the direct gazes of the subjects in works like “Pork Queen” are confrontational enough to keep Joseph’s women from appearing to be mere passive victims in life or of our gaze.