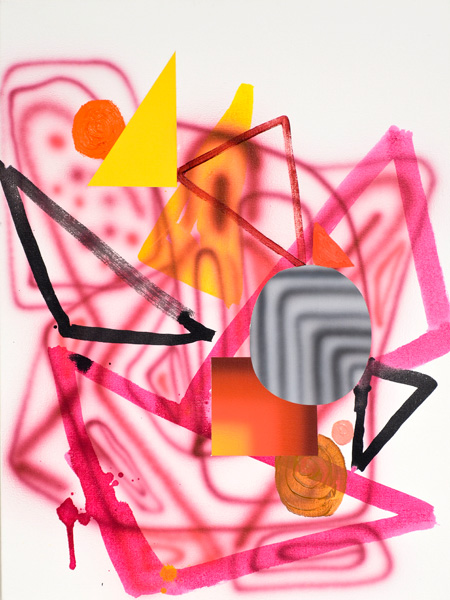 “Radiant Space,” the title of Joshua Podoll’s show, provides a loose indication of the inspirational core of his work: meditation.  Earlier paintings often employed literal interpretations of radiance, in the form of sunbursts/starbursts, sometimes making up entire images. As the paintings have evolved, the starbursts have become limited to occasional passages within a larger structural framework made up of sections of Albers-esque squares; airbrushed emanating lines in Stella-like patterns; and a preponderance of increasingly expressionistic gestures that surge through the entire proceedings, alternately coalescing and dispersing their counterparts. Painters will want to move in close to examine the brush and airbrush handling, and the occasional blobs of built-up paint, but the work is best taken in from a middle distance, where not only will your eye be encouraged to wander, so too will your sense of presence and awareness. Not quite Rothko’s Chapel nor Matisse’s armchair, Podoll’s images are indeed highly effective painterly analogs to meditation itself.

Carlos Bunga’s offerings are more of the hybrid variety, in sync with an approach to painting that’s become increasingly common over the past 10 years. Start with the sculptural paintings: two bright, monochromatic pieces alight as square troughs on the wall, elegant but a touch folksy. They in turn bookend a grid of silver bromide prints whose images are obscured by squares of latex paint — they’re paintings/photographs. While not a new trope (gallery-mate Kevin Appel has been taking on this strategy in very different ways), there’s a subtle yet persistent tension here between top layers and those beneath, between image and object. Bunga pulls it off in a vocabulary all his own.