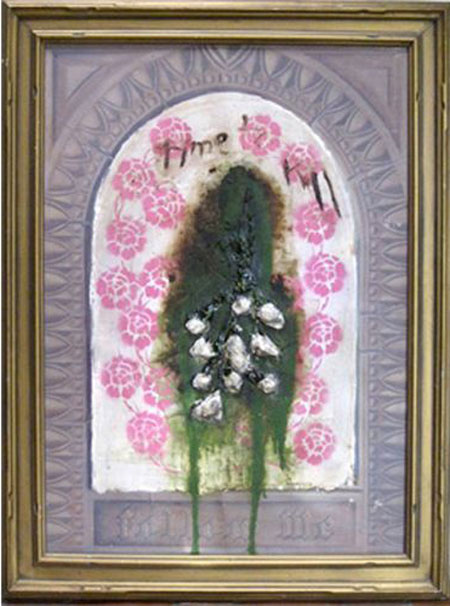 This airy, minimal gallery space was subtly transformed this summer: its soft white walls belied a peculiar pallor; its gravel walk crunched a little ominously; a sharp wind coaxed its way into the gallery corners and stayed there. If Gebert's setting had characteristics of an almost-too-scary 19th century ghost story, it’s because the space was hung with the work of Covington Jordan, whose mysterious, goth-flavored paintings are as densely crafted as they are thematically elusive. The vintage appearance of "Wreath" is enhanced by its raw linen background, which is overlaid with burlap. The painting features a central ring of flowers, which in turn surround a wolf-like creature that is obscured but for its blazing blue-green eyes. It’s foreboding and a little deranged, and I could see it hanging nicely in the private study Edgar Allen Poe.

Elsewhere, Jordan’s wolves are quiet, even contemplative, but ready to pounce. The private, deeply deliberate artist likes it that way. He says, “Lots of my paintings are about redemption, or are related to the concept. But I never try to explain my work; I want the viewer to do the interpreting.” Entirely self-taught, Jordan doesn’t shy away from incorporating unexpected materials into his compositions. A handful of the paintings are embellished with thickly painted flowers, whose resemblance to dried roses is so strong I was surprised to learn the artist makes them himself. The shape-shifting surfaces of Jordan’s canvases seem to have a life of their own: they are left unpainted in spots; they twist and languish under thick layers of paint; they are often scrawled with fragments of text.

One of the most intriguing works in the show is "Follow Me." Framed in kitschy faux wood, it was once a painting of Christ that Jordan found at a secondhand store. He covered the central figure with arching, whitish paint, but left the original, Olde English lettering, "Follow Me," at the bottom. A noxious green, in turns jarringly fluorescent and goopily matted, seems to gush from the painting’s center. Jordan’s paintings are grim and cunning fairy tales that are so bizarre and unexpectedly pretty that you almost don’t care how they end.