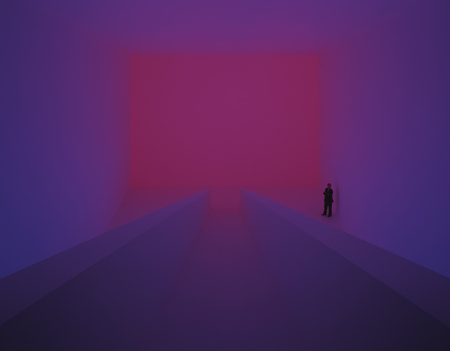 James Turrell has shifted the way we engage light, and has done so in a monumental manner. Typically light is used to direct our attention but instead Turrell’s installations use light and space as the focus of contemplation. This massive retrospective addresses over five decades of the artist’s work in several of the museum’s buildings. It’s further complemented by exhibitions across the world, including sites in Boston, New York, and two locations in Italy.

Turrell had an early epiphany as a college student in Pomona. Noticing the light protrude from a slide projector in a darkened art history course, this fortuitous experience inspired him to think deeper about light as the subject of art. While Turrell is well known for his ongoing “Roden Crater” experiment (once thought to be completed in 1990), he began with humbler materials. His studio in the 1960s was located in the Mendota Hotel, and it was there that Turrell began to experiment with controlling natural light through openings in his studio’s walls and windows.

From there Turrell went on to become a key a member of what came to be known as the Light and Space movement. He and other artists incorporated Southern California engineering advances that were a product of the heyday of the aerospace industry. He shared an aesthetic focus on perceptual phenomena with the likes of Robert Irwin, Peter Alexander and John McCracken.

An early work from 1966 entitled “Afrum (White)" is a good example of how the artist played with our perceptions of light. The subject appears to be a floating white cube in a darkened room. Positioned in the corner, it is spaced evenly between the ceiling and the floor.  The corners of the room seep with a darkness that contrasts with the glowing quality of the apparent cube. The experience heightens our depth of field because things are not as they seem. Rather than a physical cube, it’s an optical illusion created by two projections that focus light on the converging walls. As one encroaches the piece physically, the three-dimensional qualities lessen. It is the crispness of this piece that is so surprising. Light being controlled so delicately and evenly is difficult to imagine.

The project which would become the “Roden Crater” was conceived by Turrell in 1974. He arranged for the purchase of the crater in 1977 and construction began in 1979. It is located outside Flagstaff, Arizona and seems to be an ongoing project that has no projected completion date. Phase one, which included reshaping the crater bowl and designing many of the interior spaces, was recently wrapped up. The actual crater is an extinct volcano cone nearly 600 feet tall and an estimated 4,000,000 years old. It's a sight that is reminiscent of an ancient wonder of the world, here geared for astronomy. Designed to bring the outside indoors, the installation hides evidence of the horizon and transports the sky into the space occupied by the viewer. By removing these markers inside the crater installation, Turrell intends that you will feel the earth moving.  The many tunnels and corresponding chambers serve as prime viewing areas for celestial events.

The “Roden Crater” has involved an incredible financial commitment from the artist over the last forty years. A photo by Florian Holzherr captures the bearded and grey Turrell posing in front of the massive earthwork. His calm demeanor and proud stance portray him as a confident conqueror who has set his sights on taming this massive endeavor. The exhibition would not be complete without attention drawn toward this undertaking. In fact the section devoted to it here is the most impressive installation dedicated to the project to date.

In many of Turrell’s installations, our perception of distance is altered. “Raemar Pink White” (1969) is a long room that features a rectangular form that floats amidst a sea of pink light. Standing at the far end of the room away from the light, it looks like a mythological portal to another realm. The absence of light on the floating rectangle resembles a doorway and heightens a sense of wonder as bursts of light radiate from the edges. Turrell’s use of architecture is the unmentioned vehicle that a necessary frame for these installations.

Turrell is influenced by his Quaker faith; it's a worldview that practices an unmediated communion with the divine. The use of space, illusion, and refracted light are a few qualities that are connected with this lingering supernatural presence. It’s as though the meditative stance of Mark Rothko’s work has been multiplied infinitely so it’s become atmospheric. So much that it impacts you physically and slows you down as you walk within it. In “Bridget’s Bardo” (2009), the largest of the walk-in installations, we feel small in relation to the projection of light. Bardo is a Tibetan word that means intermediate state or liminal state. A quality of ambiguity is felt when one walks down a ramp into a viewing space flooded and enwrapped with color. Similar to Turrell’s faith, the light is so close, yet also elusive to our touch.

From installations to intimate pieces, Turrell’s work is best engaged silently. It’s a phenomenological experience that requires a critically reflective stance to take in both the grandeur and the illusive nature of the medium. It’s also simply fun and refreshing to engage because it’s so different from the usual museum and gallery ritual of looking at art.