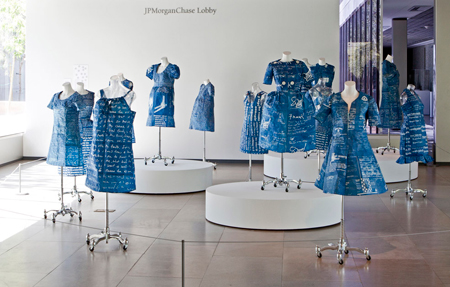 A fourth-generation Phoenician, Annie Lopez has been a mainstay in the downtown art scene since the early 1980s and was an early member of the local Mexican-American artists collective, Movimiento Artistico del Rio Salado (MARS). The art scene has weathered its ups and downs, but Lopez has quietly continued creating her mixed media, photography-based pieces, which intermingle personal narrative, Phoenix nostalgia, Latino societal concerns and a wry sense of humor.

Using the cyanotype process on pieces of commercial tamale paper that are then sewn together, Lopez has created 14 blue dresses filled with words and images that mine her personal history and act as “sandwich signs,” in her words, for stories that need to be let out, not held in. The dresses are in various styles, made from second-hand patterns and displayed in a tight circle of wheeled racks. Lopez makes careful choices as far as newspaper headlines, documents, hand-written letters and other text in both English and Spanish, along with giving each dress a considered title. One example is “Naturalized Citizens,” revealing the process that family members went through; another is “The Result of Mexican Food,” an ample shift decorated with Mexican recipes. Accompanying the dresses is a series of beautifully reproduced, mostly black-and-white family photos, made poignant by Lopez’s narrative text describing the pictured individuals and events.