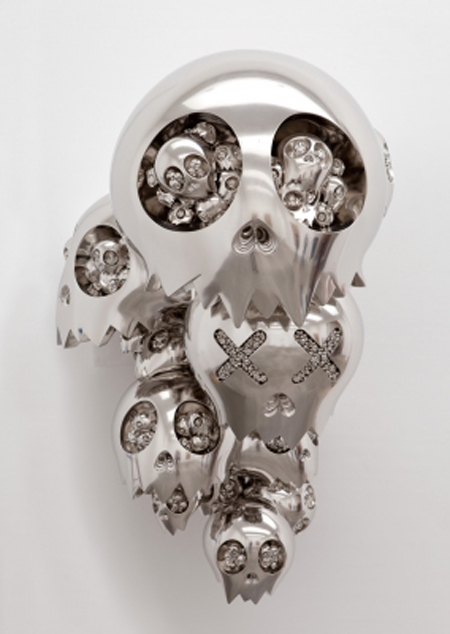 With all of the Instagram-bound smartphone photographs being taken at his opening and likely throughout the show, Takashi Murakami continues to be the embodiment of the crossover artist. While his own factory-like apparatus is in some ways comparable to those of Jeff Koons and Damien Hirst, his oeuvre is in many ways (embrace of fashion, self-iconhood, etc.) far more closely aligned with Warhol, particularly in his series of self-portrait paintings and a sculpture, featuring the artist in his signature round glasses. The show, titled "Arhat," refers to a fully enlightened Buddhist, and includes both immense and more modestly scaled paintings with what amount to a plethora of Arhat caricatures, ranging from the clichéd older men in robes to outright monsters that are part traditional mythic demon and part "Where the Wild Things Are."

Seen in the context of his classic flower paintings — the latest versions included here are also packed with equally cartoonish skulls — it's difficult to invest oneself in the Death & Rebirth theme that permeates no deeper than surface level, other than to ask oneself with mock-seriousness, "Is nothing sacred??" Meanwhile, the highlights of the show turn out to be Murakami's bling-iest sculptures, which place him more squarely beside Hirst after all. "Flame of Desire" is a 15 ½-foot high totem of undulating flames made of real gold (you can tell from the glow), anchored at its center by a skull sporting numerous smaller skulls in its eyes. "Fate" expands upon the skulls-within skulls formula in a smaller wall-mounted piece that's been coated in platinum leaf. Oddly, through the forthrightness of their over-the-top materialism, these works proclaim their relevance in the challenging format of traditional sculpture, nearly relegating their painting counterpoints to be so much background noise.