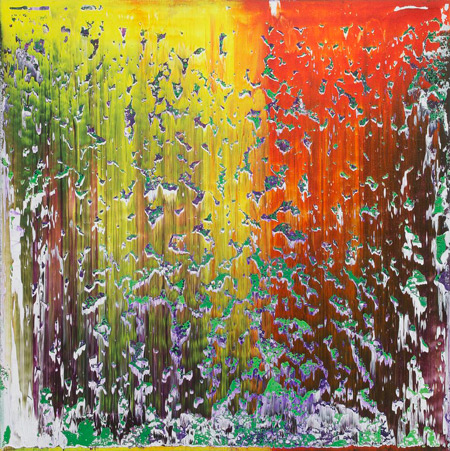 Theoretical physicist Michio Kaku writes about how our passive observations of the mysteries of nature lead scientists to manipulate and choreograph matters of life and intelligence. Hence, scientific revolutions continue to change our perceptions of the universe. It remains a role of the artist, however, to shape how we understand these newly revealed phenomena.

New York-based Stanley Casselman seems to love that role, citing his intention to influence our consciousness towards the embrace of fresh paradigms via the one place he finds pure logic, abstract art. Fascinated with the assumption that the truth of our existence is fluid, his paintings explore ideas of evolution and metaphysics. In previous works, he utilized acrylic on polyscreen to manipulate light, creating perceptions of texture and dimension by stringing fluid scenes together. If the works in this exhibition, titled "Inhaling Richter," bear a resemblance to those of Gerhard Richter, it is because he accepted a challenge from art critic Jerry Saltz to create works in Richter's style. Therefore, in deference to Richter, all the exhibited paintings bear the title "IR." The irony is that resemblance came about when he was least trying, perhaps because both artists rest their processes on a shared view toward metaphysics.

Though these paintings may evoke a relationship to his predecessor, they are distinctively Casselman’s aesthetic. At the same time, the expression of universal forms achieved through the relationship between line and color remains a shared philosophy. Mainly, discoveries are made through process, such as how the orchestration of light and the manipulation of paintings create the perception of texture, form and dimension. It is an attempt not only to influence the consciousness towards the indefinable, but also to unload inner feelings and internal visions. Both artists, in fact, use the elements of chance to probe the mysteries of consciousness. Richter created abstract paintings using squeegees on scrims, controlling layers of color through subtle changes of direction and touch. Employing a similar technique, Casselman uses a flexible squeegee to apply layers of acrylic paint to a wet canvas. The squeegee allows the artist to subtract or scrape away paint. The result is an evolving, dynamic surface that modulates from painting to painting. It is through subtle nuances of tone that an attempt is made to induce attitudes of contemplation.

Casselman's questions about the universe open pathways to the cathartic nature of his creative process, particularly his search for discoveries of the unknown through pure abstractions. Though the paintings are indecipherable, their appearance emulates atmospheric conditions. His impulse towards cosmological speculation demands a technique that can evoke the denaturalization of matter. In expressing the galactic structure of the universe aesthetically, which encompasses elements of vast forces of both destruction and creation, vivid and muted colors blur and clash from one area into another. Cloudy surfaces are overlaid and interspersed with swirls, blobs and globules.

Ultimately, it is the color relationships that create the visions, it is through the process itself that revelations come, for the artist as well as for the viewer.