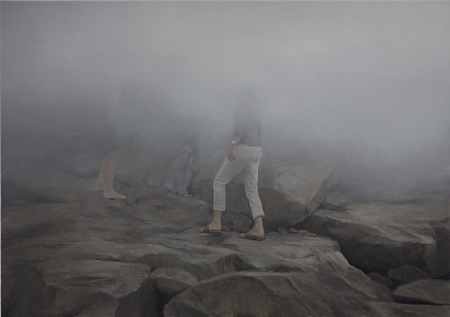 Though current American curators and connoisseurs continue to dictate that abstract and conceptual art dominate the marketplace, British painter Jonathan Wateridge bucks the capitalist system once again with a new series of contemporary realist works that turn the notion that certain types of painting are old-fashioned or outdated, on its ear. Much celebrated across the pond, Wateridge’s previous shows in London were noted for their grand-scale realist depictions of Hollywood movie sets and cinematic, apocalyptic disasters. Moving into a more subtle, gesture-driven subject matter in his Los Angeles debut “Inter+Vista,” Wateridge’s new focus on banal moments and unspectacular people expand his narrative in ways not previously explored.

Wateridge’s technique is exceptional, but that’s not all we note here. Content is equally, if not even more essential and that’s an area in which realist painters at times fall short. Wateridge, however, especially in this subdued series of works, manages to connect skill and content more than a few times and when that connection is made, when he has sensed that there is more in the moment than meets the eye, he leaves us with a context generated by what we perceive, not merely by what is presented. There is a take away

In "Lift I" and "Lift II," for example, we find a person riding in an elevator. In the first work, it’s a middle-aged man, white dress shirt unbuttoned with no tie, and sleeves rolled up. His jacket is folded over one arm, rumpled, not neat. In his face is registered a rich mixture of contemplation, weariness, pensiveness, resignation. What has happened isn’t what’s important or why the work resonates, rather it moves us because it is familiar, a moment in time that we’ve all experienced and recognize. We can see ourselves in it.

The same familiarity occurs in "Lift II," in which we see the back of a woman with long blond hair taking off her coat. The elevator is monochrome and static, just as in "Lift I," but in this case we have no face to examine, just hair that is obviously clean and styled and probably belongs to a woman under 50. The coat suggests that she is upper middle class, not rich. We search for more information, and in that search we develop a storyline – it was raining outside, she is leaving, she is arriving, something wonderful awaits her, or perhaps something terrible.

Other frozen moments in time include fog-obscured beach boulders in which only glimpses of legs and feet from climbing human bodies can be seen, and old men looking out of windows and sliding glass doors either at something or through a pane of time into the past. For some viewers, there may be initial disinterest in this imagery. After all, what’s so spectacular about ordinary looking people riding elevators or staring out of windows – most of us do those things every day. But it is this commonality that represents Wateridge at his best, for the context resonates more truth and emotional depth than any stylized society portrait or epic historical documentation would.

Wateridge is documenting but not for the grand record of events. Rather he seeks to capture the even grander record of humanity – its ordinary personality and pursuits. Wateridge’s paintings don’t instruct us on identity or history, they report to us who we are and what we are doing. Such objectivity can be unsettling at first, in the way that one initially reacts to real people on the street – their imperfections, their slovenliness, their dullness, their obliviousness to how they carry themselves or interact with others. Skillfully but with modesty, Wateridge neither heightens the drama nor turns it into a cartoon. Instead, he captures (or rather creates) that moment honestly and without comment. The artist speaks to us through his painting, but makes it seem as though the painting is doing all of the talking. In this way, his method – realism – becomes not outdated or old-fashioned, but instead of our moment.