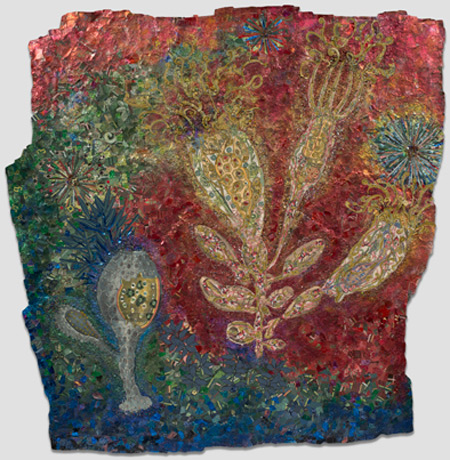 Miriam Wosk was exuberant. She had a vivacious personality, and the energy that defined her life, also came through in her art. Born in Vancouver, B.C. in 1947, Wosk moved to New York to study art, later becoming a fashion illustrator. Her illustrations were featured in publications including the New York Times Magazine, Harpers Bazaar, and the Saturday Review. She even created the first cover of Ms magazine in the Spring of 1972. During her life, Wosk exhibited regularly in numerous solo and group exhibitions in the Los Angeles area. Her last solo exhibition was in 2008 at Billy Shire Fine Arts in Culver City, where she presented large scale works that explored the relationship of humans to nature. Sadly, Wosk died after a along illness in Santa Monica in 2010, but luckily left behind a large body of work. "Abundance and Devotion: The Art of Miriam Wosk" includes over fifty pieces that trace her trajectory from illustrator to mixed media artist.

One way to define Wosk, and something that is central to her work, is that she was a collector. She amassed a huge array of source materials to use in her mixed media works. These included antique prints depicting human anatomy, diagrams of animals and images of flora, as well as found objects like feathers, pieces of brightly colored or patterned fabric, all of which she used in part to add dimension to the otherwise flat paper or canvas surface. When making a work Wosk visited and revisited her archive of "stuff" adding and subtracting what seemed appropriate for each piece until she intuited that it was right. She believed one work led to another, and there are recurrent themes that weave throughout her oeuvre. Wosk had spiritual leanings and although her pieces are not didactic, they dealt with dreams, the unconscious and life after death. She injected her bold, colorful and often bombastic works with issues ranging from human sexuality, to fantastical and imagined relationships between humans and animals. She believed the unconscious and the world of dreams paralleled the language of art.

While this exhibition includes numerous studies and illustrations commissioned for magazines made in the 1970s and a handful of oil paintings from the 1990s, the majority of the works here date from 2003-2008, and many are among her last works. Included is the spectacular "The Phenomenology of the Self" (2004-05), a collage on paper work spanning 89 x 61 inches. This momentous piece fuses skeletal and muscular diagrams of the human body surrounded by floral elements that emanate from the core as if colorful veins or branches. Every inch of the surface is covered with geometric patterns and organic elements painted in intricate detail. Similarly, in "Bones of the Golden Serpent" (2008) Wosk collages butterflies and painted foils around the illustration of an animal's skull. The antique tone of the printed image of the "serpent's" head is contrasted by Wosk's application of reflective blues and greens that shimmer with immediacy. Wosk's works were not confined to the rectangle. "Dreamweaver" (2008), "Beyond the Impossible" (2005) and "Into the Deep" (2004), expand beyond the frame in irregular shapes often made by adding on pieces of paper as the work emanated out from the center.

The depiction of bones, muscles and organs were often collaged along with doodles, flowers, and Baroque flourishes that cascade throughout the compositions. Wosk's works convey that they were labor intensive, filling as they do all the available space on the paper or canvas structure. Wosk explored inside-outside dichotomies by imagining what was contained within a form or a body and how that exterior related to that which was outside and unseen yet integral to its survival. This relationship is articulated in "Beyond the Impossible" (2005), in which she depicted the internal organs of a bird surrounded by a plethora of feathers, and suggested in "Tome 5 Pl 3" (2004), where colorful flower-like circular shapes overlay an antique anatomy print of a male torso. These abstract flowers emanated from the figure's internal organs, as Wosk conflated internal workings of the human digestive system with the vivid network of a daisy chain.

Wosk exulted in the shape of a lobster, believing it to be one of the most magnificent creatures on earth. She also wove intricate designs around images of fish, birds and spiders. Unabashed about her spirituality, the artist was clearly aware of the fragility of existence and strove to make her pieces come alive as celebrations of life.