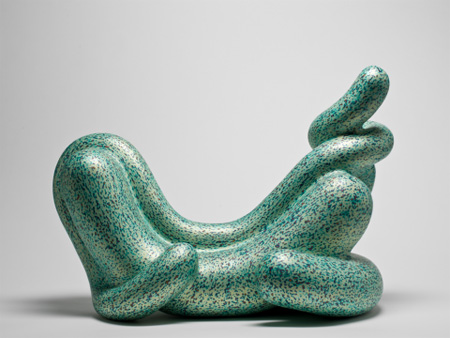 “Ken Price Sculpture: A Retrospective” is this fall’s must-see. It’s a gorgeously presented exhibition of works by an important artist, one of those most responsible for the seismic shift in ceramics from craft to a form of fine art.  He was trained in ceramics in the 1950s when ceramics was staid, but from the beginning he wanted to be seen as a sculptor and a contemporary one at that. For a time he studied under the charismatic Peter Voulkos, who was teaching at the Los Angeles County Art Institute (which later became Otis). Eventually, he got a BFA from the University of Southern California, where he later taught for a decade. He insisted upon being shown in art galleries, alongside other contemporary artists. So he showed at Dwan Gallery and Ferus Gallery in Los Angeles, and in the 1970s he was included in “Eight from California” at the National Collection of Fine Arts in Washington, D.C., and in “200 Years of American Sculpture” at the Whitney in New York.

This exhibition is a roller coaster tour of his career. It opens spectacularly with a roomful of his late work – curled and furled organic shapes, covered with a pock-marked pattern, with each “pock” multi-colored due to the careful sanding away of successive applications of color. My eye was particularly drawn to those which were acid green with red “pocks,” such as “Hunchback of Venice” (2000) and “Vona” (2008). The combination is vibrant and alive.

Early on Price made sculptural rather than utilitarian shapes, then coated them in unusual ways – often employing paints not meant for ceramics. He loved playing with surfaces. In the early 1970s he made small, rough-hewn pieces with jagged edges that he would stack together. He called them “slate cups” – of course the joke being that they were not cups nor functional in any way. Later that decade he made a series of small wooden cabinets filled with multiple mugs, pitchers and plates – these were called “Happy’s Curios” and they satirized the idea of terra cotta wares produced en masse for the tourist trade. In 1970 he and wife Happy had moved to Taos, New Mexico, and these pieces reflect Southwest-type decorations. I have never found this series particularly interesting, and seen in this larger context they simply pale. In that time period he also started making small geometric pieces and painted the smooth facets with different colors, many of them brightly hued reds, yellow, and oranges.

Price moved back to Los Angeles in the early 1990s. His work grew rounder and more sensuous, morphing into flowing amoeba-like shapes. Sometimes he slyly included suggestive cut-outs or cavities, and in “Arctic” (1998) the reddish cavity is erotically charged. A handful of his last works are here – these are very large, more floor than tabletop sized, and are like giant gummy worms in exuberant configurations.

Kudos go to the fruitful work of curator Stephanie Barron, and to architect Frank Gehry, a longtime friend of the artist, for his design of the installation. The galleries are spacious, with crisp white walls and squared showcases that show off the work beautifully. The catalog is beautiful, too, and, smartly enough, offers multiple views of many pieces. But no quantity of lovely reproductions can take the place of seeing this work in person.