'Rebels Without a Cause'
Column by Mario Cutajar 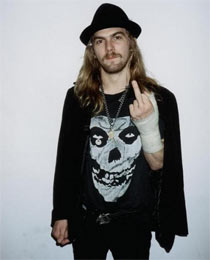 Those who help the despairing

The monotonous regularity with which the art world conflates authenticity with self-destruction, visible yet again in the wake of Dash Snow’s heroin overdose early this summer, had me wondering about just what function it is precisely that the figure of the self-destructive artist plays in our hopelessly corrupt cultural economy.

By turns, psychopathic, narcissistic, self-mythifying, charismatic, goatish, beautiful, repellent glamorous, poetic, and boorish, this figure seems to embody the fantasy of an uncastrated male beyond all law, something akin to a priapic pagan deity. At least, this is how the culture industry tends to position these figures, whose self-destruction renders them both immortal and interchangeable, as if each of them were the latest incarnation of the same, ever-youthful god. But the question for me is who gets what out of this fantasy.

Having posed the question, I immediately recognize that it is trite. It is doubtful that anybody past pubescence actually gets off on a trope that has been around the block so many times and has reached such a stage of decomposition that you can smell it coming a mile away.  The real cultural phenomenon here is not why the figure of the artiste maudit still has legs, but why despite it not having any, despite its having been used up and drained of all its libidinal energy by the relentless commodification of bad manners and petty criminality, it remains in service.

Even the star-struck New York Magazine feature that a couple of years ago brought Dash Snow and his pals Dan Colen and Ryan McGinley to the attention of the latte-sipping public could not entirely hide the flimsiness of what was being presented. The article was peppered with tortured, preemptive paragraphs such as this:

If you were going to hate these guys, here’s how you would do it: You could hate them for using the word artist so frequently and so shamelessly. Or you could hate Snow for coming from money—mountains of it!—and being a cop-taunting, Saddam Hussein–fetishizing petty criminal. If you are an aging punk, you could hate Snow in particular for going over old ground and thinking it’s something new. (Iggy Pop puked on his audiences a long time ago.) Or you could hate all three of them for being so enamored with penises and what comes out of them. How much talent does it really take to come on the New York Post, anyway?

Well, why instruct us in the proper way “to hate these guys” if not because failing to at least hate them, we might not even notice them.

Anyone familiar with the Situationist critique of the “spectacle” will readily inform me that the repurposing of the vacuous into the spectacular (or the pseudo-provocative) testifies to capitalism’s cunning ability to make lemonade out of lemons. Where once suffering provoked real protest and real revolt, now revolt itself has been virtualized into the photogenic gesture of revolt, which transforms revolt into eagerly consumed pornography.

That is all well and good, except that Snow’s provocations, most notably his ejaculations on the pages of the New York Post, themselves had the character of Situationist detournements. Without necessarily knowing it himself, Snow was in several respects a distant child of the Situationist International, or rather, one of its decomposition products. With the Situationists, art and politics were supposed to converge. In reality, as with much that can be traced to the New Left, the Situationist stress on “desire” and negation had as its (unintended?) result the elevation of masturbation into radical gesture (literally so in the case of Snow, and before him, Vito Acconci’s “Seedbed” [1971]).

Until the advent of Romanticism, artistic authenticity was not an issue because the worth of an artwork was not measured by how expressive it was of an artist’s individuality but rather by how rhetorically effective it was. If you were painting a portrait of the king, you were successful if you produced a painting whose every detail was infused with majesty.

Authenticity became valued in art at the moment that it was felt to be disappearing from everyday life, the moment, that is, when what today we call “alienation” came to be felt as a widespread condition. The displacement of the largely rural population of Europe and its concentration into cities, the resulting destabilization of identity and the rise of anonymity, and the devaluation of artisanal craft and the transformation of production into mechanized factory work, were all contributing factors to the modern fear that life was progressively losing its meaning even as it gained in tempo.  In this context, art became a refuge for everything that seemed to be on the verge of extinction in the modern world: feeling, beauty, sublimity, and depth, and the connection between feeling and gesture (the actualization of feeling) that we call authenticity.

Why should authenticity become associated with artists’ willingness to sacrifice themselves for their art? The question might better be turned around: How could art that aspired to be authentic demand anything less? In a world in which everyday things had ceased to make present (represent) their makers, art was expected to make up for this loss by embodying the life force and genius of the individual who created it. To hold anything back was to compromise the authenticity of the work, that is to risk making work that failed to elevate itself above the banal.

Willy-nilly, artists became the guardians of meaning in the modern world. Along with this exalted and onerous position there developed the notion that the purpose of art, and specifically avant-garde art, was to somehow redeem modern existence by reuniting “art” with “life,” thus making life more artistic (meaningful) and art more ordinary.

What has come down to us as modernism was this hope that art could regenerate the world. What we have observed over the past century or so is that art, on its own, does not have the power to do so. By the middle of the last century, that impossibility had become so sufficiently clear that various artists shifted their focus to using art to alter themselves either by using their own bodies as raw material or by devising rituals and ordeals that would alter their own and their audience’s perceptions and consciousness. A lot of these actions, from the rites performed by the Viennese Actionists to Chris Burden’s self-puncturing performances to an entire genre of performance art that involves the artist subjecting him- or herself to something resembling torture, may well contain an element of attention-getting. But the fact that exhibitionism should require this ritualized self-punishment is significant in itself because this demand foregrounds the anxiety that not merely meaning, but the very sense of being embodied is under threat in contemporary experience.

Nonetheless, in the tendency to make a spectacle out of physical endurance and the mortification of the body, we must recognize the implicit internalization of defeat: The world not being amenable to modification, the only object over which I retain power is my body. In every other sphere I am reduced to passivity, but in relation to my body I retain the ability to act.

Therein is the clue to why self-destruction is something the art world continues to shamelessly encourage (not overtly, of course, but through the canonization of self-martyred artists.) Self-destruction continues to be romanticized because it is a form of “self-empowerment” that has no social consequences whatsoever, a mode of transgression whose victim is the transgressor himself, and which not only leaves the social order untouched but actually strengthens it by providing yet one more demonstration of its unchangeability. Invariably, the postmortem mythification of the self-destroyed artist presents us with a picture of an individual who was a “free spirit,” “lived life to the full,” “broke all the rules,” and yet never posed the least threat to the system.

Brecht’s point about “those who help the despairing” being the scum of the earth is that transgressions worthy of respect aim at permanently removing the conditions that make transgression necessary. As such, those who undertake to alleviate despair, as opposed to those who want to make a fetish out of it, are more likely to be ridiculed as out-of-touch boors than celebrated as free spirits. People like Dash Snow are useful to the art world because they help hide the vacuity around which most of its frenetic activities revolve. The figure of the artist martyr helps sustain the illusion that something more than greed, vanity, and blind ambition are at stake in contemporary art. If there is, it appears to have something to do with the male appendage. Call it authenticity.