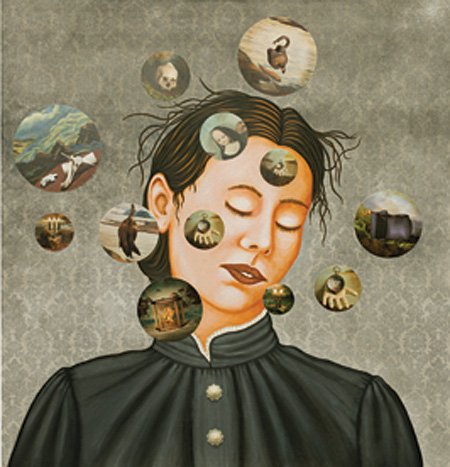 It was no surprise to progressive women and feminists when, in the fall of last year, “woman number one,” Sharon Bialek accused presidential frontrunner Herman Cain of sexual harassment and was immediately smeared as everything from, as one broadcaster put it, a “hooker” to a gold-digger. A few months later, it only took a suggestion from Georgetown University student Sandra Fluke that students be given the same medical options as the faculty for the vitriolic insults and accusations to come crashing down on her as well. And everyone – especially women – will recall the photo of the first panel of clergymen (no nuns or lady reverends) giving testimony against the Obama Administration’s federal mandate that church-affiliated employers provide women with preventative health care. It was no surprise.

The laundry list (pun intended) of outright attacks and insidious tactical maneuvers by some of the males of the species to restrain, put down and ultimately silence any female who dares step out of an archaic and controlled prototype is centuries long. The upshot, of course, is that women now have more power, men are, as a whole, more enlightened, and the days of chaining (literally, at times) women to beds and locking them into attics, basements and dungeons have thankfully passed.

In “Madwoman in the Attic” (a title gleaned from the feminist literary criticism of Sandra Gilbert and Susan Gubar), Lezley Saar examines the tortured and tormented dames of 19th Century literature and illuminates the fashionable tradition of gender suppression that is still, unfortunately, timely. Honoring the ladies forced into bed-rest “cures” and those who escaped such confines by faking insanity, Saar presents a study of serene and surreal paintings, photographs and miniature dioramas of demented women living distorted tales.

The heroine that was essential to include when it comes to ladies and lunacy is from Charlotte Perkins Gilman’s feminist short story, “The Yellow Wallpaper.” In a painting of the same name (most of the works are titled after the female protagonist pictured), Gilman’s gothic wife suffering from both post-partum depression and a dominating husband is set against some very tame lemon peel paper. She is contemplative and still, as she was ordered to be, and yet the tendrils of her hair wildly unfurl, creeping into the air and across that yellow wallpaper. They sprout bubbles of both real and imagined scenes of her living nightmare: little skulls, nature walks she was forbidden to take, and the keyhole that served as the literal barrier to her escape and the symbol of her autocratic husband.

In "Ana Karenina" we find Tolstoy’s tragic female – who was subjected to the harshest of infidelity double-standards – gazing off into similarly troubling thought bubbles; Kate Chopin’s Edna Pontellier from "The Awakening" appears crowded and almost smothered by spheres that recall her struggle to reconcile progressive views on motherhood and femininity with the narrow attitudes of the turn-of-the-century South. Other “mad” women in residence include Charlotte Bronte’s, cold and unpleasant Lucy Snowe from "Villette," and Lady Caroline Lamb’s much abused Lady Calantha from "Glenarvon," a novel based on her affair with Lord Byron that was called “hysterical” (a favorite lady label) at the time and almost sent her to ruin. Finally, we have Therese Raquin, Emile Zola’s desperate French-African dame who conceives of and executes a violent escape from her pitiable marriage to an egocentric malcontent, but soon finds her liberation transformed into debilitating guilt and then suicide. Still, we note, she has escaped.

Joining this host of fractured females is a group of pieces titled after popular diagnoses of the era – Religious Melancholia, Melancholia Passing into Mania – featuring anonymous women. Here, the subjects are again lost among floating circles of symbolism, including medical tools such as syringes and clamps that were used to “cure” them, glass-encased eggs, crucifixes, and the image of doom that appears in most of the works, a human skull.

It all sounds much more morbid than the actual images, however; visually, the terror of these women has been subdued, in the typical feminine way, so as not to offend, and it’s a choice that was by no means accidental. Saar, like her harried, historical heroines and contemporary scrutinized sisters, uses the stealthy tools available to females and yet also, in order to attain true power, reveal them. It’s this decision that makes the mad women in her attic cease to be victims and emerge triumphant.