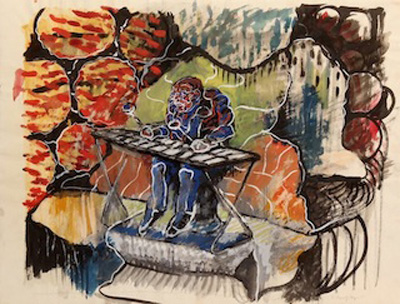 While the works on paper in “Xylophone Solo” may be lesser known than Seymour Rosofsky’s canvases, they are undoubtedly remarkable in their own right, possessing an intimacy and narrative unique to their media. Out of the Chicago figurative tradition, the works of the late Rosofsky (1924-1981) contain the artist’s visual vernacular of performers, domestic scenes and childhood relics. All are grimly twisted in a way that resonates as unsettlingly now as it did when they were created decades ago.

However, the artist’s frightening style is not one that shocks outright; rather, it’s his particular brand of subtly subverting otherwise familiar situations that disturbs. In "Couples Dancing in Living Room," Rosofsky’s child-sized figures are spinning amongst their furnishings with a grinning jester doll that occupies the space between their pelvises - one example of the manner in which the artist’s works aptly engage the more lurid parts of a viewer’s imagination.