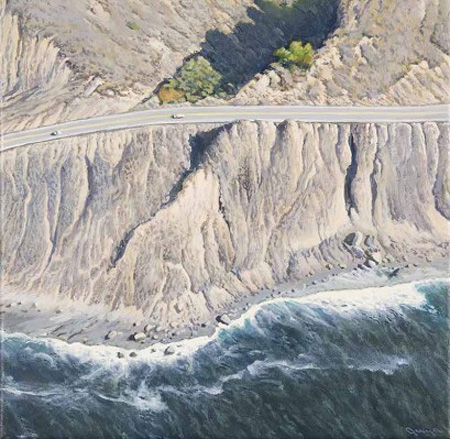 Woody Gwyn’s satellite view of the Pacific shore, with coastal highways snaking through verdant landscapes, are as accomplished as any of the landscapes the artist is known for. “Pacific Coast” and “Pacific Coast II” capture between them the moods of the sea from an elevated point of view. A sense of sparkling light from a hot California sun bathes these images in shimmering atmosphere. “Rocky Point,” painted from a more down to earth perspective, is rich in atmosphere with a blinding light reflecting off of the ocean.

Gwyn’s nighttime sky paintings, like “La Via Lactea,” capture views of the milky way suited to Gwyn’s impressionistic technique, particularly when rendering a field of stars. It’s an uncommon subject for a landscape painter. So, too, are his European cityscapes like “Salamanca Place” which has the feel of an urban scene in the early morning hours before human activity crowds the streets. The three bodies of work in “Elements of Landscape” are distinct from one another, with the effect of showing off the range of Gwyn’s discerning eye for masterful composition.