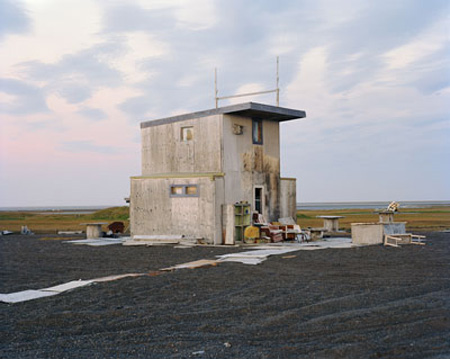 Eirik Johnson’s photographic work documents the contemporary west, from decaying remnants of boom and bust speculation to portraits of die-hard hunters and gatherers. "Camps and Cabins" represents two distinct yet related bodies of work that explore modes of improvised living. The “Cabins” series is more intriguing than the large-format “Camps” series, in part because of the strange landscape of Barrow, Alaska, the northernmost town of the United States.

Desolate in the perpetual dawn of arctic summer, the makeshift shacks resemble the architectural trend of modular “micro housing.” The inhabitants — Iñupiat families — are conspicuously absent, highlighting their seasonal existence in these camps, hunting waterfowl in the summer and seals in the winter. Home-made swing sets, retro office furniture, a basketball hoop, and a tricycle await the return of their part-time owners. For the “Camps” series, Johnson photographed mushroom foraging camps in Oregon’s Cascade Mountain region. The most interesting are portraits of the foragers themselves, itinerants living on the fringe.