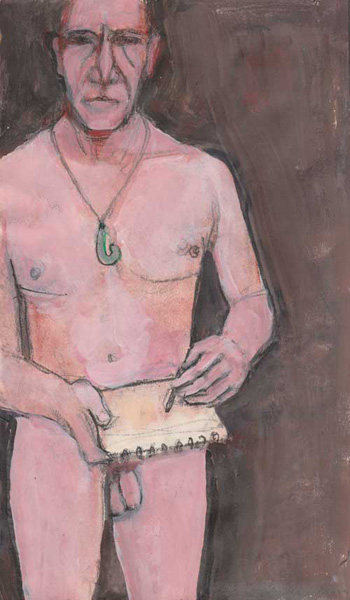 Theophilus Brown, “An Artistic Giant,” celebrates the life and more than 65-year art career of one of the key members of the Bay Area Figurative Movement. Brown passed away earlier this year at the age of 92. On view in the intimate three-room gallery are 36 works by Brown, along with four by his long-time partner Paul Wonner, two letters to Brown (a Valentine from Wonner and a Cézanne inspired handmade card also from Wonner), and a photo of Wonner and Brown. All of the pieces come from Brown’s and Wonner’s personal collections; most have never been shown in public.

Of particular interest are the pieces that break from the representational and figurative work Brown was known for (there are also many of those pieces on view as well). Of note are numerous colorful abstract paintings and collages that he started making in 2001. And, surprisingly, as it’s long been assumed that Brown didn’t create abstract work until the last decade, there is also a small abstract work on paper, “Untitled,” dated 1949.

Several of the works provide a more personal look at the artist; as gallerist Reynolds has suggested, they give the impression that Brown was working something out on the canvas. For instance, “Slaying the Beast” (1965) features a naked man wielding a sword, which he has poised over an attacking alligator. The work is done in black, white, and grays, and it’s nighttime, which adds a dreamlike/nightmarish quality to the image. Three small works (all 4-by-6 inches and from 1977), two of which feature snakes and one featuring horses, also have elements of grappling with beasts. This trio of paintings had hung above the artist’s bed.

There are numerous fine examples of Brown’s male nudes, drawings and paintings, as well as a few self-portraits and female figurative works. Employing heavy line work and at times bold color, the influence of the Fauves is evident. Also on included is one of Brown’s early football paintings, “Football” (1952). It’s full of movement, with a jazz-like feel. This is one of several works that became particularly famous after being featured in Life magazine. Brown, who went to the studio six days a week up until his death, returned to the subject recently; found on his easel was a painting, also titled “Football” (2011), which features a the athletes at mid-play. From his advanced figurative work, to the abstractions, and venturing into varied subjects such as sports, the show provides an efficient snapshot of the wide-ranging talent of this prolific artist, and is augmented with valuable insight into his psyche.