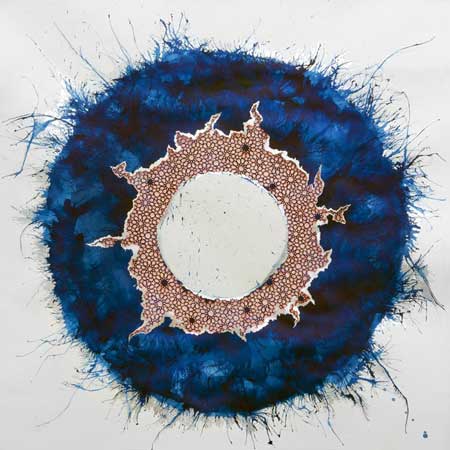 The paintings and sculpture of Sherin Guirguis and a multimedia installation paired with the paintings of Joshua Hagler explore the continuity between past and present, in life as well as art, with beauty, power and formal sophistication.

Guirguis’s show, entitled "Duwamah," or rip current, is inspired in part by the revolution, still ongoing and uncertain, of the Arab Spring in the Los Angeles artist’s native Egypt. According to the gallery’s press release, the Mubarak government’s television coverage of events consisted of a single shot from above of Tahrir Square, resembling “a solar system or wheel from a helicopter’s aerial vantage point. Protesters ... flowed ... in and out of the concentric circles of the square; an inner circle of tents, enclosed in a circle of protesters, who are in turn encircled by army and tanks. This series of concentric circles has. For the artist, become a cipher or vessel for the revolution.” The nine ink and watercolor paintings on paper, featuring floral or tentacular blooms created by pushing the paint with compressed air, have a passing resemblance to Sam Francis and Kenneth Noland, depending on whether the blooms occupy a larger field ("Untitled," "Mood Wu Gazr," "Untitled (Khosouf I)," or are situated at the centers of the compositions ("Untitled (El Medan)," "Untitled (Khosouf II)," "Untitled (Khamsa)." But Guirguis’ elaboration or decoration of the ragged edges of the forms with gold or silver paint provoke thoughts of a deeply historical Egyptian or Islamic tradition.

Guirguis also balances the propulsive, cataclysmic energy of her blossoms and explosions with areas of paper that have been meticulously cut, probably with an X-Acto knife, in the complex overlapping geometric Mashrabeya patterns that we associate with Islamic art. These intricate woven patterns seem to underlie the white paper fields, like linen warp and weft stripped of gesso, or architectural framing exposed beneath plaster, suggesting unchanging order underlying chaos, incident and accident.

Joshua Hagler explores history and heritage as well in "The Imagined Chase," which borrows its title from Dante’s fear — justified, not imaginary — of enraged, vengeful spirits, from Canto XXIII of "Inferno." Aboriginal religion and prehistoric cave paintings were concurrent reading subjects, so the “apocryphal religion” of transcendence and rebirth that the artist creates blends Christian symbols and ideas, primitivism, unsettling and ambiguous imagery, and audiotaped reflections on life and death. The audio is movingly voiced, paradoxically, by 3D computer-modeled avatars.

It’s a challenging show, developed over a three-year period, that takes time, and an average gallery visit will not suffice. The emotional core of the work is Hagler’s twelve-minute video projection, "The Evangelists," featuring the commentary of four men prominent in Hagler’s life - his father, a comic-book artist/mentor, a homeless friend, and a neighbor who burned down the building Hagler lived in — as stand-ins for Matthew, Mark, Luke and John. Their avatars, created by Andrew Klein and other animators, muse on matters philosophical based on long taped solo interviews that Hagler excerpts and reassembles. Even if not all of the comments are completely audible (subtitles might help, or a transcript), the bull session that never actually took place is enthralling, like the dialogues "My Dinner with André" or Diderot’s "Rameau’s Nephew." Here there are tragic overtones: we may never figure life out, but it’s still deadly serious as well as comic. The figures freeze or sleep or die when not speaking, so it’s as if one voice or one mind animated them. At times the silent figures distort into Francis Bacon-like smears, or are refracted and reflected as in a funhouse mirror.

The video plays in a darkened room, Plato’s cinematic cave, which viewers enter through a door, the second of three, that is scorched with winglike shadows and covered with white cloudlike masses composed of thousands of tiny action figures. Mounted in what would be the nave of the church are Hagler’s paintings, monochromatic, with some of them painted on scavenged windows with their frames intact. To the left "The Birth (in three acts)" is a triptych depicting mysterious symmetrical Rorschach-test forms, floral and anatomical, looming in dark space, framed by H-shaped structures like soccer goal posts. Over on the right is a symmetrical array of eight paintings, each one depicting more mysterious Rorschach forms, except for the outer two, which resemble gray seascapes but are perforated with H-shaped formations of drilled holes. Each of these opens onto a view of a still frame from the video; use the provided magnifying glass. The paintings, which have titles taken from the video transcripts (e.g., "I prayed to God that I wouldn’t die," "I need for us to be normal" and "I need our faith to hold things together") feature small prints, not always easily decipherable, of the avatars from the video that have been adhered with clear, rubbery silicone gel.

A series of nine "Shadow Person" so-called Pfaugler prints (look up http://www.refractionart.com/archives/963 for an explanation of Hagler’s and George Pfau’s invention) forms a cross facing the door of the video sanctuary. Remember when Indiana Jones told an adversary that an artifact “belongs in a museum” and was told, “So do you!” So does this; trust me.