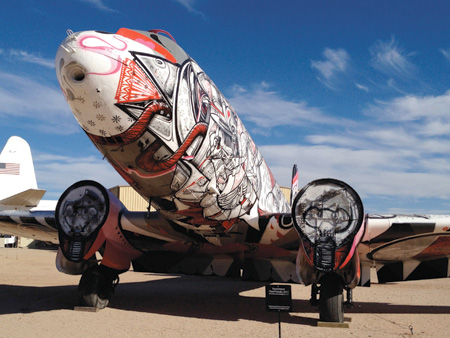 The Boneyard is a special place of fantasy and intrigue in Tucson--a sought-after destination for tourists from around the world. "The Boneyard" is the unofficial name for the Aerospace Maintenance and Regeneration Center (AMARC), a joint storage and service facility managed by the US Air Force adjacent to Davis-Monthan Air Force Base. There, out-of-service airplanes languish in the dry desert, waiting for the reclamation of their spare parts. But there are also other "boneyards" in the vicinity, privately owned operations that trade in the skeletal remains of airplanes, available to a range of interested individuals, from airplane aficionados to interior designers and now, thanks to the vision of visionary gallerist/curator Eric Firestone, artists.

Nearby is the Pima Air and Space Museum, one of the most intriguing museums in Arizona, and one that brings thousands of visitors to Tucson. Covering 80 acres and five separate hangars, it is the largest non-government funded aviation museum in the world and features more than 300 aircraft and spacecraft, including some of the most historically significant and advanced aircraft from around the globe. Together, this region is a visual feast for those interested in the history of aviation and aviation design, not to mention the loaded metaphors these grounded dinosaurs of the sky represent.

Recently, the Pima Air and Space Museum has boldly expanded their purview in an ambitious display that brings art and history together-- "Round Trip: Art from the Boneyard Project," on view through May 31, 2012. As the centerpiece of the project, Firestone invited more than thirty prominent graffiti and street artists from around the world to paint whole airplanes or parts of planes. The results are stunning reinterpretations of the airplane graffiti and "nose art" that became popular during World War II. These aviation embellishments are taken to new heights by utilizing these eccentric-shaped "canvases" to make personal and socio-political statements.

After discovering the boneyards housing these mighty giants in the desert surrounding the museum, in 2010, Firestone and curator Carlo McCormick were inspired to engage in what Firestone calls "guerilla curating." First, Firestone organized the Boneyard Project, "Nose Job" at his gallery in East Hampton, Long Island, in the summer of 2011. For this project, he purchased two dozen bullet-shaped nose cones and had them shipped to the East Coast. He then invited such notable artists as Richard Prince, Kenny Scharf and Tara McPherson to re-interpret the forms in their own imaginative styles. Some artists addressed the streamlined symmetry of the forms themselves and produced eloquent, elegant and even whimsical hybrids of sculpture and painting. Others addressed the polemic history of war and their individual relationships to aviation and/or the military through family memories.

The critical success of "Nose Job" encouraged Firestone to expand on the concept for the second installment in what will be a series. In addition to McCormick--an authority on New York downtown culture and a contributor for Paper magazine--Firestone added to his curatorial team Med Sobio, an independent curator and consultant on graffiti art, and Lesley Oliver of the Scottsdale Museum of Contemporary Art, a well-known figure on the Arizona art scene. When Scott Marchand, Director of Collections and Aircraft Restoration at the Arizona Aerospace Foundation, learned of Firestone's airplane purchasing frenzy from nearby scrap yards, he got in touch with him and convinced him to keep the planes in Tucson, where the artists could paint on site.

"Round Trip: Selections from the Boneyard Project" features selections from Firestone's previous exhibition along with more than a dozen cones interpreted by new artists to the project. Included in the exhibition are DC Super 3 planes painted by graffiti artists How & Nosm, Nunca, and Retna; a C97 cockpit by Saner; a C45 plane by Faile; a Process DC3 cockpit by Bast, and a Lockheed VC 140 Jetstar by Andrew Schoultz. New nose cone artists Ron English, Mark Kostabi, Hector Ruiz, and Daniel Martin Diaz will join Aiko, Peter Dayton, Shepard Fairey, and others. "Most of the artists are in their 20s and 30s." explains Firestone. "And many of them are on a waiting list to paint a full plane. I'm purchasing a helicopter too, so we will see who gets to paint that."

According to Schoultz, painting full airplanes is a daunting task. Using traditional brushes to create fluid lines in primary colors, he covered a plane with overlapping eyes in concentric circles that culminate with the face of a menacing, grinning beast. On the other hand, Retna worked spontaneously in aerosol paint to create raw, black-on-metal patterns in X's and O's, reminiscent of a giant Tic Tac Toe game. Against the brilliant Arizona sky, these three-dimensional canvases stand out in stark contrast to the surrounding desert in a celebration of the free-spiritedness of art working in tandem with the traditions of aviation design.

Sold as scrap 30 years ago, new government regulations will make used airplanes and parts difficult to acquire, which means these unique works of art will soon be even more rare. So far, the results have been bold, ambitious, and visually compelling because of the scale, shape, and history of these massive and unique substrates. The artists, perhaps more comfortable working on buildings and walls, have risen to the challenge with complex and lively narratives and patterns that challenge the notion of what a painting should be and where it should be seen. While the first project attracted the attention of the New York Times, the second phase has now garnered interest from the Smithsonian. Firestone anticipates that the third phase of the project will be to engage yet more artists, and to expand the project into new locations throughout the country.

Julie Sasse is the Chief Curator and Curator of Modern and Contemporary Art at the Tucson Museum of Art.